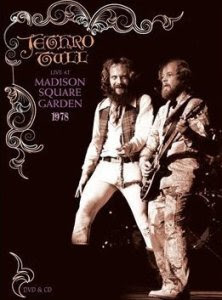 Sporting the cover of the CD/DVD set is a very strange looking Ian Anderson with a typically normally looking Martin Barre. Anderson looks like he is getting ready to do something perverted with his flute again. Glad to know 31 years on nothing much has changed in that respect.

Live At Madison Square Garden (CD/DVD) is one of several live Jethro Tull DVD’s that have become available over the last few years. I am glad that I didn’t miss this one because it’s a real gem. It contains a 93 minute concert recording in 5.1 DTS (96/24) surround sound (+Dolby Digital 5.1 & LPCM 2.0) and within all of that is 50 minutes of video footage from the groundbreaking (an often over used term in music but in this case true) of an international broadcast via satellite on October 9, 1978. The CD is a 78 minute edited stereo version of the concert. The only difference in tracks between the two is the “Bagpipe Intro” on the DVD and obviously the visual impact of a live Jethro Tull performance that is so strikingly brought to life again.

The camera work is typical from the 70’s, the usual pulling in and out in an annoying way but other than that it is a quality video in an astounding 5.1 surround sound bringing it to present day specs in respect to auditory pleasures. The CD’s sound is very good as well sounding full and crisp in stereo.

I never saw JT during this time period and wish I did. I have seen them three times now in 00’s and with each passing year Anderson’s voice deteriorates, which is normal I would think after performing for over 40 years. In any event I would still go see them live at the drop of a hat because they are as sharp as ever musically and Ian is always very entertaining.

In 1978 JT were in their prime with presenting tracks from period albums like War Child, Minstrel In The Gallery, Too Old Too Rock ‘N’ Roll: Too Young Too Die!, Songs From The Wood and Heavy Horses. Not to mention the multitude of legendary releases prior to that. Their performances never lacked substance or moments of exhilaration. With all of that great material to draw that from it is no wonder. This performance is exceptional and the reproduction in sound and vision is really extraordinary when you take all points into consideration. I actually did not expect it to be that good but was also disappointed how it ended so abruptly like someone pulled the plug (gremlins in the sat com). No doubt this was due to many factors of the day that came into play which I am sure would not be a concern with today’s technologies. The booklet is rather skimpy yet an adequate overview. This would not be a suitable addition for a casual rock fan’s collection but a must for hardcore JT fans like yours truly.

Highlights include some incredible solo takes from Barre and innovative flute playing from Anderson. A typically superb Jethro Tull performance after all is said and done. It would have been a nicer package to treasure if there were some interviews with the band members and bonus treats that I have become so spoiled in expecting but I love this band and this reminded of why. Even though they could of done so much more (and maybe they still will) with the presentation and packaging of this important event it is easy to forgive all the inadequacies when you simply love the music and it brings you so much joy.