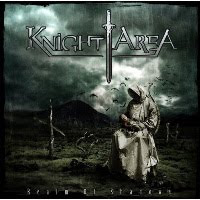 If you are a fan of progressive rock or Europop, you might enjoy Realm of Shadows, the third album from Dutch band Knight Area. If you’re not a fan of that genre, then chances are the album won’t do much for you.

Realm of Shadows has, to say the least, an interesting vibe to it. It has the fairly electric sound that sets progressive rock apart as a genre, but that seems to be the only cohesive aspect of the album.

On some songs, such as “A Million Lives,” Realm of Shadows has an 80s flair similar in style to that of The Police. On others, such as the second half of “Occlusion” Knight Area sounds closer to one of the definitive prog-rock bands, Pink Floyd. Just for good measure, the album also offers “Two of a Kind,” which sounds like what you might hear on any easy listening station, and “Dark Souls” which sounds like a poor attempt at electric-goth.

Taken individually, the songs aren’t bad. Although long --almost all of the songs are over five minutes-- the songs manage to be catchy (especially “A Million Lives”), yet mellow enough to not be annoyingly catchy. On their own, the songs are pretty good listening.

As a whole, however, Realm of Shadows is only lukewarm. The songs all posses the same essential progressive rock stylistic backbone, which ends up proving to be a positive and a negative for the album. On the plus side, it ties the album together despite the style deviations from song to song. On the negative, after awhile all the songs end up blending together even with their differences.

Realm of Shadows is an album that showcases its creators as having the definite potential to make a high-quality piece of work, but unfortunately this album doesn’t quite get there. If you already like progressive-rock, it would be worth checking out, but if you don’t, this wouldn’t be the album to sway your opinion to the positive.