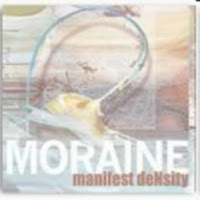 When a band or artist decides that they want to create their own sound, like every good, or at least unique band does, they often break a few rules and cross that dreaded genre line. This has the potential for either being a huge success, like the thrash metal movement of the 1980s, which combined the speed of hardcore punk and metal sensibilities, literally changing the face of music. It also has the potential for fleeting popularity and eventual ridicule in some circles, much like the fate of nu-metal, which had its basis in the already iffy combination of rap and rock music.

With Manifest Density, the instrumental debut release from Moraine, the band completely destroys the boundaries of several hugely differing genres to create something totally unique. With influences including progressive rock, jazz, and world music, listeners are treated to new blend of refreshing, albeit nearly unclassifiable, music.

Moraine, thanks to their innovative choices instrumentally, has successfully created a sound that is both very modern yet classical in tone, beginning with “Save the Yuppie Breeding Grounds.” The band's intentions are made completely clear, attacking the listener with jolting strings coupled with lightly distorted guitar, which I might add is the foundation upon which the songs on Manifest Density rely on.

Immediately following “Save the Yuppie Breeding Grounds” is a very jazzy track entitled “Ephebus Amoebus.” Beginning with a light cymbal riff, setting the tempo for the guitar, violin, and what seems to be subtly distorted cello (forgive me if I'm wrong). An interesting point I'd like to make about this track is the effect that the strings create. While lacking a vocalist, Moraine still manages to recreate a voice-like quality where vocals would be most expected. This is done, as the track slows down, through use of the violin and later cello, a characteristic seen throughout the album.

A very noteworthy ability that Moraine possesses is the skill to relay feelings throughout their music. In “$9 Pay-Per-View Lifetime TV Movie,” especially, the listener can follow a distinct storyline, even with the lack of words, and admittedly, the lack of cheesiness that most Lifetime movies tend to possess. “Staggerin'” although creating a completely different impression, does the same thing. Opening with smooth clean guitar, soon again coupled with strings and the rest of the band, it eventually becomes more and more chaotic. Call me crazy, but I myself was able to picture someone walking, and then proceeding to stumble, and stagger back up, as this unnamed person's situation became progressively worse.

The title track of the album took a surprisingly familiar turn. Opening with a guitar reminiscent of some of Joe Satriani's more melodic work, the track proved to be a very good example of today's instrumental rock. Instead of serving as a vocal line, however, the strings echoed the main guitar riff, which gave it a very cool effect.

The album ends with the very appropriate closing track “Middlebräu.” Understandably the longest track, it serves as a last display for each band member's abilities, which would attest for the unusual fusion of genres it contains: funk, jazz, hard rock, and even the touch of blues. It is a perfect way to underline exactly what it is that Moraine does, and an even more perfect way to end such a unique album.

I think it's safe to say that it would be impossible to highlight everything that this album contains in one sitting. But what I will say is that Moraine succeeded in literally creating their own unique but refreshing genre of music. As with anything, however, Manifest Density is not a flawless effort. The main issue I find with this release is, much less in the music itself, but in the fact that it's more musician's music, which is somewhat dangerous. As a musician myself, I have a true appreciation for all the tones and textures that Moraine creates with their music, as well as the consistently excellent musicianship. A casual listener, however, may find themselves listening to something that is just, quite frankly, too much at once.