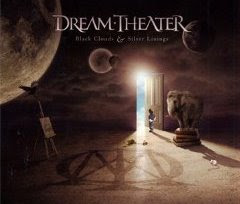 Dream Theater believes in giving their fans what they want and one of the focuses of their drummer Mike Portnoy is to give back what they have received. That philosophy is felt in equal measures with the rest of the band. What DT fans enjoy most are the epic tracks that offer everything the band has at its disposal. Featuring a literal all star cast at every position, this band knows how to please each other creatively during the recording process and in turn the listeners reap all the benefits when they release a new album.
John Myung (bass), John Petrucci (guitar), Jordan Rudess (keyboards), James LaBrie (vocals) and Mike Portnoy (drums) are conceivably the most unified and talented band currently recording and each member is a key ingredient in the Dream Theater machine. Although I put a lot of focus this time out on Mike, he truly deserves it. He is a thought leader musically, creatively and handles their business smartly. He is the heart and soul of this band and that cannot be denied.

Black Clouds & Silver Linings (Special Edition) was released in early June this year to coincide with Portnoy’s brilliantly managed Progressive Nation Tour. Again this was designed to give it back to the universe by offering new bands to the genre some needed ears in a live setting. In a genre so specific with a smaller fan base worldwide (in comparison to rock or pop stars), everyone needs all the help they can get. It all works very well and I have been turned on to some new sounds in the past two years by attending the concerts. If it wasn’t for Portnoy’s belief in the bands that tour with them, it never would happen.

This is a three disc set, offered in various configurations, to hopefully please all the needs and tastes of their faithful followers and ever growing newcomers. A lot has to be said for a band with nearly 25 years together that is still new to so many listeners; the DT nation is growing daily and this release increased their incredible exponential growth.

The first CD breaks down into six tracks of vintage DT metal and prog. I think with the passing of time it is safe to say that this is already being considered as a classic rendering of the metal-prog genre, giving further authority to the fact that this band has set the gold standard for everyone else to follow. The lead off track “A Nightmare To Remember” comes roaring out of the gate, setting the stage and atmosphere for what is to come. “A Rite of Passage” is a dark and ominous track with a first class video to accompany it. Every aspect of the DT process in regard to delivering their media has continued to get better with each passing year. Portnoy finishes out his story about AA and his battle’s with the disease in “The Shattered Fortress” fittingly reviewing some of the other songs that made the story over the years by adding the lyrics in between all the instrumental anarchy. He also offers a touching tribute to his dad, who passed away recently with “The Best of Times.” This is one of the more classic rock and pop influenced tunes I have ever heard DT perform and it’s a fine song at that. The meaning is very special because of what Mike’s father meant to him and the music seems quite fitting for the lyrics. The status quo attacking prog- metal would not work well with the subject matter of this song. ‘”The Count of Tuscany” is the magnum opus of the recording clocking in at an incredible 19:16, nearly an entire side if it was on a vinyl LP! (The vinyl version is available on the Roadrunner website). This song features a band in sync hitting on all their cylinders; it’s like hearing a concert all wrapped up into one track. They are very good at setting the stage and taking you through complex time signatures and changes, offering different musical chapters to go along with the story they are portraying through the music. Let’s not forget the ballad-like “Wither” that stands tall in the middle of this session. James LaBrie’s voice is outstanding throughout but particularly smooth, succinct and emotionally powerful on this track.

The second disc features some excellent takes on classic rock tracks that had a hand in influencing all the members of the band. These are not the filler cover tunes or throw in bonus tracks you will find on many CDs; these are legitimate solid covers of great songs. Rainbow’s “Stargazer” is superb, my favorite out of all six.

Now the ultimate addition to the package is disc three which are all the tracks on disc one without the lyrics. Now all of you James LaBrie wannabes can throw on this CD and sing along. In the same instance, all of the tech freaks and players of instruments will cherish this opportunity to play along or use the tracks to create their own special mixes.

Dream Theater you have given us another classic prog-metal release, except this time it is loaded with all the extras that everyone loves, especially big fans of the band. What is not to like here?

1. A Nightmare To Remember

2. A Rite Of Passage

5. The Best Of Times

6. The Count Of Tuscany

4. Take Your Fingers From My Hair

1. A Nightmare To Remember (Instrumental)

2. A Rite Of Passage (Instrumental)

5. The Best Of Times (Instrumental)

6. The Count Of Tuscany (Instrumental)
By Keith "MuzikMan" Hannaleck at November 07, 2009