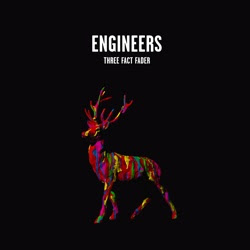 Engineers are back. Four years after the release of their landmark debut, the band return with their epic second album, Three Fact Fader, which will be released by Kscope on November 24, 2009 in North America.

The 13-track album was produced by the band along with Ken Thomas (Sigur Rós, M83, Maps) over a period of two years, with the final tracks being completed earlier this year. It comes packaged in stunning artwork by legendary music photographer Tom Sheehan.

Engineers are not like any other band. Onstage Simon Phipps is the singer, Dan Macbean is the guitarist, Mark Peters is the bassist and Sweeney is the drummer, but the real clue is in their name: they approach their music like engineers, carefully constructing wonderful walls of sound.

Following the rapturous reception that greeted their mini-album Folly in 2004 and debut Engineers the following year, it’s taken them a long time to build the epic that is Three Fact Fader. After initial recording sessions with producer Ken Thomas, Engineers became unwitting victims of record company restructuring and the album was left in limbo, unfinished until the band reconvened earlier this year, largely motivated by public support. “We seem to appeal to people in a really deep way – people tell us our music has helped them through intense times in their lives,” explains Mark Peters. “This is why it was so important to get the album released, it means so much more than the peripheral aspects of releasing records.”

It’s not just lyrically that Engineers have a deep emotional resonance; the music itself has an overwhelming sense of purity and beauty that you can completely immerse yourself in. It was this tendency towards epic soundscapes that saw Engineers lumped in with the nascent shoegaze revival when they first appeared; now that the scene that celebrates itself has gone overground with the reformation of My Bloody Valentine and high-profile compilations from Rob Da Bank and revivalist label Sonic Cathedral, it seems as if Engineers have timed their return perfectly. “It pleases me to see shoegaze finally being accepted as a genre rather than something to poke fun at,” says Mark. “I do see links with our music, some of which are intentional and some of which aren’t, but there’s a lot more besides. The best music taps into the enigma of the human condition and thinking too much about trivialities such as genres tends to put the mockers on creativity.”

There were clearly no such constraints on Engineers’ creativity while they were making Three Fact Fader, which takes the influences of the debut and expands on them, resulting in a much bigger, bolder record. So, while “Brighter As We Fall” does indeed sound like “Slowdive,” it’s “Slowdive” as re-imagined by Phil Spector. “Song For Andy” could be one of those previously unreleased Dennis Wilson tracks that cropped up on the Pacific Ocean Blue reissue. “The Fear Has Gone” begins with ambient drones and neo-classical strings reminiscent of Austin, Texas minimalist duo Stars Of The Lid. The heavenly harmonies of “Be What You Are” would sit comfortably on David Crosby’s solo debut If I Could Only Remember My Name. “What Pushed Us Together” has a similar sunshine psychedelia feel to Panda Bear’s “Person Pitch.”

However, perhaps the biggest development is in the use of rhythm. Both “Sometimes I Realise” and “Hang Your Head” have a pounding, dancefloor-friendly quality, while both the title track and opener “Clean Coloured Wire” combine woozy, My Bloody Valentine-style melodies with a sense of propulsion purloined from krautrock. Literally in the case of the latter, which is based around a sample from Harmonia’s Watussi, which is so effectively employed that Michael Rother himself claims the song gives him goosebumps.

So, thanks to one of the forefathers of German experimental music and the persuasive powers of the record buying public, Engineers are once again hard at work, building their ever more impressive sonic architecture. “We felt a massive rush from knowing that Three Fact Fader would finally be presented as we wanted it to be,” concludes Mark. “Now, playing live is top of the list of our priorities and we’ve started to get some new ideas together. Don’t expect such a long gap between records next time...”

For more info on Engineers go to www.kscopemusic.com/engineers.