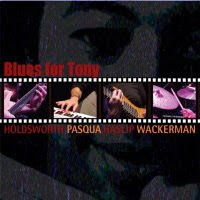 In 2006, guitarist Allan Holdsworth, keyboardist Alan Pasqua, bassist Jimmy Haslip, and drummer Chad Wackerman came together to pay tribute to the New Tony Williams Lifetime. This collaboration, appropriately entitled Holdworth Pasqua Haslip Wackerman, took a tour in 2007, and the best cuts were compiled into Blues for Tony, the only official CD release to come from the collaboration.

A two disc selection, it perfectly showcases the talents of four musical geniuses throughout. Although classified as jazz, there are other prominent influences within the music. Opening with the obviously progressive title track, each musician has their place in the spotlight. Although there is no specific focus of the song instrumentally, I would have to say it includes some of the most ridiculous jazz guitar work I've ever heard in my life. As the song tones down in tempo, the subtly distorted guitar that's fairly reverb-heavy comes in, and the guitar remains in focus for a good three more minutes, but never becomes boring. The spotlight then turns to a, somewhat initially confusing, drum solo, but there is never any shortage of virtuosity, whatsoever.

The next track, “The Fifth”, is the only track solely written by drummer Chad Wackerman. It takes a much less progressive approach than the previous track. There are a lot of noticeable sound changes in the keyboard, and more emphasis is placed upon the bass guitar. There is also, yet again, another phenomenal guitar solo, which will end up being the predominant focus throughout the album.

“It Must Be Jazz” is the only track in which all members claim writing to. The incorporation of the several different effects, like distinctive wah, and some new kind of distortion, add a whole new feel to the music – almost a space-age, modern feel that's totally unique. It seems entirely redundant to mention the ongoing guitar solo, which is pretty much flawless. It's an interesting piece that never falters in any way.

Moving onto disc two, it begins with “Looking Glass”, a long piece that is the only composition of Allan Holdworth on this disc, unlike the previous. This disc tends to focus on keyboardist Alan Pasqua's compositions, including solo piece “To Jaki, George, and Thad”. The shortest full piece in the collection (not including the guitar intro to “Pud Wud”), it is also the darkest in tone taking a whole new, very somber turn, but in all honestly, the only thing I can say about it is the fact that it is absolutely beautiful.

“Red Alert” closes the album, originally a work of the New Tony Williams Lifetime, written by bassist Tony Newman. This version, however, maintains that same space-age feel of “It Must Be Jazz”, only exponentially more prominent. It has some of the most interesting instrumental work on the album, and I can honestly say I've never heard anything like it.

This is, without any doubt, some of the coolest, most attention grabbing jazz I've ever heard in my life. Although admittedly, I'm no expert on the genre, this is exceptional. It never loses its momentum, despite lengthy compositions. I honestly think that can be the only complaint one could have about this album: song length. Some people just wouldn't be able to sit through 11-minute songs, and I, to an extent, understand that. Some songs, because of that, might become a bit of a drag at times. But the music is fascinating, always changing, and consistently interesting. The perfect blend of progressive, rock, and jazz, is near perfect. Another thing I'd like to point out is the fact that it is a live album. It could easily be studio work, by the sound of it, and the audience never overwhelms what you hear. Musicians will have the greatest appreciation for this album, but so will any intelligent casual listener. As a guitarist, it has left me completely speechless, left only to admire the work put into this, and to envy the talent. It's crazy.