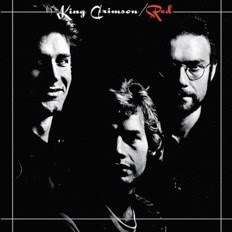 •RED – is the first release in the King Crimson 40th anniversary series.

•The classic album has been mixed for 5.1 Surround Sound from the original studio masters by Steven Wilson (Porcupine Tree) & is fully approved by Crimson founder Robert Fripp.

•DVD-A also features two of the additional tracks from the CD in 5.1 DTS & MLP Lossless Audio & all three track in High Resolution stereo plus one further track in Surround & Hi-Res

(Larks’ Tongues in Aspic II, The Night Watch, Lament & Starless), long sought after by fans of the band.

By the time King Crimson entered the studio in July 74, the band had spent the best part of two years on the road, recorded two albums along the way (‘Larks’ Tongues In Aspic’ & ‘Starless & Bible Black’), & shed two band members en route (percussionist Jamie Muir left for a monastery, violin/mellotron player David Cross had left at the end of the US tour a week earlier. They had also built a reputation as one of the tightest, most powerful bands on the rock circuit. Recording as a trio in Olympic studios in London, with contributions from former members & friends on sax, violin, oboe, clarinet & a string section, the group produced the last Crimson studio album of the 70s & one of the decade’s masterpieces - Red.

Red emerged as a distillation of everything Crimson had been working towards live & in the studio between 72 and 74. In the thirty-five years since its release, Red has built an enviable, enduring reputation among fans & professional musicians alike – with bands from each succeeding decade citing it as an important influence. Vernon Reid (of Living Colour) has spoken of being “amazed” at the power of this band live, Butch Vig reputedly played it to Nirvana as the ideal rock trio sound/template prior to the recording of ‘Nevermind’, bass maestro Billy Sheehan regards it as one of the all time great recordings, while Primus’ Les Claypool huge & the members of Tool – with whom a more recent line-up of Crimson toured in 2002 – are also firm enthusiasts of the album.

As with so many key records of the era, it is only in recent years that the album’s real significance has become apparent. As younger generations of fans discover the band – whether directly or via some of the musicians mentioned above referring to it  - the album has become one of Crimson’s most successful. It also routinely emerges as the favourite studio album for many long term fans of the band – no mean feat with such a rich & varied recording history to choose from.

Steven Wilson summed it up recently:- “I hear it as a power trio record albeit an ambitious and experimental power trio”  Talking of the pieces Red & Starless, he noted “these tracks are landmarks, real masterpieces.."


While Steve Vai, in a lengthy online eulogy to Crimson & Fripp written during the 2004 G3 tour that featured Steve, Joe Satriani & Robert Fripp wrote :- “It’s impossible to quantify the effect that this band has had on contemporary musicians”