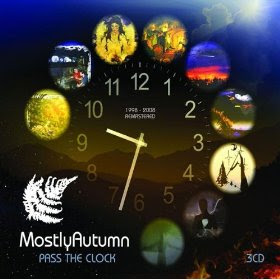 Mostly Autumn has been one of the most productive progressive rock bands over the last ten years. They also quickly became one of the best even though flying slightly under the radar initially did not position them ideally or fairly. Most deservingly that changed and now its over ten years later and we have Pass The Clock-1998-2008, a collection of 35 remastered tracks spanning that timeframe.

Mostly Autumn’s sound is very atmospheric with a combination of keyboards, guitars, bass, various forms of percussion, flutes and dreamy vocals provided by Heather Findlay and David Gilmour like vocalizations from Bryan Josh. Their overall sound has always reminded me of Pink Floyd, but much of what they do is very original and memorable. I discovered this band early in their career around 2000 or thereabouts and immediately was captivated with what they had to offer. Since then I have reviewed a lot of their work including lavishly presented DVD sets and high end CDs for optimal sound. You can always count on a great quality presentation from this band.

Pass The Clock-1998-2008 seems like it could be overkill with 3 CDs and 35 tracks, however that should be the least of your worries. If you are a solid band like Mostly Autumn it’s not hard to come up with viable tracks over a ten year period, the difficulty lies in choosing which tracks to include in such a comprehensive set. It seemed like an insurmountable task for the band to choose the tracks, but it did come together and the final piece was remastering everything. The final results are jaw dropping sounds that even the most astute prog-rock enthusiast would find difficulty in criticizing. The packing is top notch featuring a high quality cardboard three piece gatefold CD holder with liner notes and the necessary thanks to all the important supporters of the band.

I suppose packaging is the least important in most cases, however when you are talking about progressive rock listeners it happens to go hand in hand with the music. Mostly Autumn has never been a band to feature futuristic or spacey designs on their album covers like Yes or Uriah Heep for instance, they are lower key and their artwork reflects a more subtle message while fitting the band’s approach and name.

This is an outstanding collection of tracks, not one dinger in the lot folks and a quintessential snapshot of one of the most excellent perhaps underrated prog-rock bands in the world.

Fans should know as well that two volumes of Live 2009 are now available from the band.