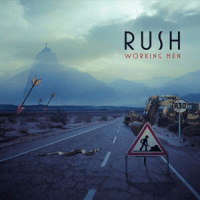 I love Rush. I really do. They're the only band of their distinct brand of progressive rock. Unique in their own right, it would seem, up until now, that any release by Rush would at least hold some merit. But upon listening to Working Men, the new live release from the trio, I'm not so sure.

Musically speaking, every recording featured on Working Men is absolutely on point. From the excellent opening with “Limelight” to the incredible closing “YYZ”, not a lot can be said other than Rush know exactly what they're doing. Geddy Lee never falters in any respect, Neil Peart continues to prove exactly why he is one of the most revered drummers on the planet, and Alex Lifeson's work still gives me a reason to believe that he is one of the most underrated guitarists today. It would seem that they actually improve as they age, a characteristic only few bands can really claim.

My biggest criticism of this album is that it seems nearly pointless as a release. Who ever heard of a “Live Greatest Hits” anyway? This album compiles material from three different tours, but only the already most known songs. You know, “Limelight”, “Tom Sawyer”, “Working Man”... all those. Now, I could understand it if these tours yielded no official releases. But the material used was from the albums mind you, Snakes & Arrows Live, R30: 30th Anniversary World Tour, and Rush in Rio. Current Rush fans will probably already have these, rendering Working Man nearly useless in terms of releases.

It would seem that in an attempt to make this album more appealing to the, say, die-hard fans, previously unreleased tracks would seem more of an incentive to purchase the album. Previously released track, I should say, as this album only features one: “One Little Victory” from the R30 Tour. Admittedly, the recording quality is actually considerably better than that of even the studio version, despite the audience noise. But it's up to the individual, really, if buying a live greatest hits album, for a band that already has eight previous compilations, is worth it for one song, especially when a studio remix is available on Retrospective 3.

Overall, it's not a bad collection. It just seems that, after their previous releases, this seems incredibly redundant, much in the way Nirvana's Best of the Box was redundant. If it seems like déjà vu, it's because you probably have heard it before. I can only imagine two main groups this would appeal to. The first would be the more obvious: the die-hards. The second, being casual listeners, who wouldn't mind hearing at least the hits, live. That's really the extent of it. Musically it's great, but, in the end, it's simply overkill.