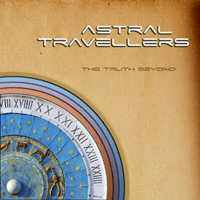 If the best music comes from outside the United States, and the classics influence the best musicians, then Astral Travellers are two for two. Their name, which they plucked from a Yes album, isn't the only evidence on their newest album The Truth Beyond of their wide range of influences. A mix tape made by one of the members must be baffling. Their list of bands they like ranges from Muse to Zeppelin and back around to Metallica.

But it serves them well. The Truth Beyond is an intimidating album of five songs that don't seem as long as they are. I wondered before I began listening to it why there were only five songs, and then realized that all of them are almost ten minutes long. With most bands, this could be a terrible thing, but with Astral Travellers, it's a wonderful one. The songs are long, and some of them get a little repetitive, but they feel composed rather than written, as though an entire orchestra could play them (the way Pink Floyd and Yes are done in tribute these days); each song crescendos and fades before it's finished.

Astral Travellers isn't a new band, just a new name. Though you can't hear an accent on the tracks, each of the five members is from the Netherlands. They've been around since 2007, trying to decide on a style before going full out on The Truth Beyond. It's almost ridiculous (in the same way that Pink Floyd was and still is – a very good way), when random instruments chime in and the lyrics become clear enough that you can understand them, or fragments of them, and you hear mumblings about serenity and innocence. But the tracks are so good that you can't be bothered by their strange nobility – the reasons the songs are silly are the same reasons they're great, just like Yes, Zeppelin, and even the Beatles (towards the end of their career) were.

Gerben van Oosterhout has an amazingly wide range; even if you can't understand everything he says, he sings almost unreasonably well. The rest of the band supplies strange rhythms and almost dissonant guitar and bass parts that blend together in a charming, orchestral way. Each song is strangely different while still managing to sound like it came from the same band with the same style.

Having more than ten years of experience has obviously paid off. The Astral Travellers's website says they refused to compromise on The Truth Beyond, and made the record they had been dreaming about. Obviously, they made the right choice – the resulting album is one that may not be a classic yet, but has the definite makings of one.

Email ThisBlogThis!Share to TwitterShare to FacebookShare to Pinterest
Labels: Astral Travellers, Progressive Rock, The Truth Beyond