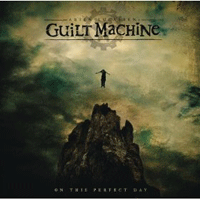 Arjen Lucassen's latest release for his new band Guilt Machine is On This Perfect Day. This release is a departure from the complex Ayreon projects that included a multitude of musicians and vocalists. Instead he favors one small consistent lineup made up of his partner, manager and lyricist Lori Linstruth (lead guitar) who was also with him in Stream of Passion, Jasper Steverlinck (lead vocalist) from Belgian alternative rock band Arid and ex-Porcupine Tree member Chris Matiland (drums) while Ben Mathot (violin) and David Faber (cello) contribute their fair share of well placed and appropriate parts and of course Arjen showing the way playing guitars, mandolin, bass, keyboards and providing some vocals. The album was recorded at Arjen’s Electric Castle in the Netherlands.


This release is more interesting and unique because of the contributions of several people from all over the world speaking in their own language on life, regret, death, guilt, and human nature. Although you will not be able to understand what they are saying (well most of us won’t) it lends a different atmosphere and kind of “get the chills” feel to the tracks. Lucassen has always had an ability to give each of his projects their own stamp of uniqueness and this one is no exception. I had no idea what to expect because I have always had some sort of insight prior to each release because of the ongoing story with Ayreon and the well known configuration of supergroups he would assemble for every project. I knew I would not be disappointed with On This Perfect Day, in fact it was a nice surprise and it turned out to be an excellent album.
There are six tracks on this CD; there is also a two disc special edition available with bonus tracks and videos. Not one of the tracks is less than six minutes with the longest being the lead off track “Twisted Coil” clocking in at 11:43. The lead singer Jasper Steverlinck sounds like he would have been a great for Arjen’s previous projects but he does make his own distinct mark here. Also Lori is no slouch on lead guitar. I already respected her for the previous work I have heard but this output is exceptional. Arjen contributes immeasurable amounts of across the board talent as usual on guitars both acoustic and electric amongst other things. Chris is excellent with all the drum parts, driving the Guilt Machine along a steady course that seems to falter. If Jaspar sounds familiar it’s because he was a guest vocalist on the third CD of Timeline on an unreleased song, called "Epilogue: The Memory Remains".
This is a fine collection of progressive rock tracks complete with the usual thought provoking album art and the bonus of the lyrics included with the CD booklet, which guarantees a reflective listen by anyone’s estimation.
I think prog rock fans and avid Arjen fans will find complete satisfaction with this recording. I found no weaknesses to mention. At times you are reminded of the old Ayreon with some of the musical displays however that is quickly dispelled with the Guilt Machine stamp that sounds fresh and full of energy.
Arjen mentioned in an interview in Classic Rock magazine that he feels like there is a black hole in his life if there is no project to be working on, which explains his continuous flow of music every year. Listeners benefit from the workhorse methods of this great artist. I cannot help but wonder what could be next! This is a great way to usher in the new decade of prog rock.