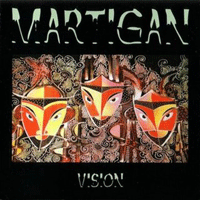 Martigan both is and isn't your typical prog band. Upon first listen, it's hard to distinguish what sets them apart, but after pouring time into each track on their newest album, Vision, you begin to see what they do, and you can see that while they fit within their genre, they are stepping out of it, as well.

The most notable thing about Martigan (beside the fact that they're from Germany but sing in English), is their rhythm and time changes. While all prog bands routinely change rhythms several times in the same song, you can not only hear Martigan changing rhythms, but feel it. It doesn't feel forced or done just for the sake of doing it – as in “Touch in Time”, when the time signature has to change about fifteen times, but seems completely necessary every time.

The instruments being played set them apart, too. Each song has an almost hypnotic keyboard part with clean, bold guitar parts that play against lead singer Kai Marckwordt's grungy voice (and by grungy, I don't mean bad; Marckwordt has a terrific voice that he chooses to use in a raspy style). Add in a saxophone and flute on most tracks, and you've got the recipe for great prog, which Martigan pulls off professionally.

Unfortunately, the vocals are usually hard to understand. “Boatman's Vision” is a great song with interesting, smart lyrics, but I had to look them up because I couldn't hear them. “Guardian angels/drift out of the scene/back home talking to/to the open sea” is what Martigan's website says the lyrics are, and I guess I'll take their word for it, but I'm too embarrassed to print what I thought the lyrics were before I read them. “Boatman's Vision” has some really incredible lyrics, which is a reason prog stands out in the music industry today – rather than singing about heartbreak like 90% of other genres, these bands tackle real subjects. I just wish I could understand them.

Martigan is an original band with a sound that suits their chosen genre while still setting them apart. You might not hear it immediately, but keep listening and you'll hear their Vision.