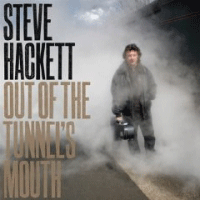 Out of the Tunnel’s Mouth, the most recent solo release from ex-Genesis guitarist Steve Hackett, is a prime example of something being “worth the wait.” An album that had to be put on hold due to some legal troubles, fans eagerly awaited Mr. Hackett’s return to progressive music since 2006’s Wild Orchids. And while Tunnel’s Mouth isn’t usually regarded as his best work to date, it still manages to hold its own.


The album opens, pretty slowly, with “Fire on the Moon.” The interesting thing about this track is the absolutely contrasting changes it makes. While it starts off, much like a lullaby, with bells, very light, clean guitar, and soft vocals, it breaks into a much more intense chorus section, and eventually by the end, the two sounds are blended to create something rather chilling.


The next track “Nomads” takes a much different approach. Right of the bat, a guitar player of any level can appreciate the work in this track, both the acoustic and electric work, which is heard in the second half. There’s a distinct cultural feel to this track in all aspects, from the musicianship to the vocal melody. It’s very cool, although I do feel like it ended rather abruptly.


The nearly nine minute track, “Emerald and Ash”, again takes a different turn. There’s a much more theatrical feel in this track. Well, maybe not so much theatrical, per se, but from the intro, and beyond, I couldn’t help but think of familiar movie scores. Now as nice as this track can sound, it also runs a bit of risk seeming a bit over the top in places, and borderline cheesy in others.


The next longest track, short by only a few seconds, is “Sleepers.” Again, there tends to be a score-like quality about the music, but this time, a listener will take note of the incorporation of the acoustic guitar, which, like “Nomads,” is dominant for a good portion of the track. I much prefer it to “Emerald and Ash” in fact, because of its much darker tone, and very interesting, much harder rock midsection. It’s a multifaceted track, that, while some of the transitions seem slightly abrupt, it’s still powerful.
The album closes with the appropriate “Last Train to Istanbul”. Again, we return to the distinct Middle Eastern feel that was first heard in “Nomads.” The instrumentation of this track is easily one of the most interesting, and the tone is beautifully dark. I personally found this to be my favorite track on the album, and an excellent closer to an exceptionally interesting album.


Out of the Tunnel’s Mouth is an ever-changing, intricate piece of work. It’s dark, cheerful and admittedly over the top in places. It’s progressive, its rock, and it even touches upon world music. It’s blatantly obvious how much work was put into this album, and with so much, there are bound to be some, at least minor, flaws. Mostly, I’d point out that in places, there was simply too much going on, instrumentally. Obviously, progressive music tends to get fairly complex, but at the same time, simplicity isn’t a bad thing. I’m not going to say this is what you would call a “musician’s album,” but there are a lot of those kinds of elements. In any case, lot of people can appreciate this, musician or not.

Email ThisBlogThis!Share to TwitterShare to FacebookShare to Pinterest
Labels: Out of the Tunnel’s Mouth, Prog Rock, Progressive Rock, Steve Hackett