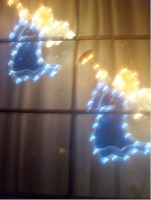 To attempt to write a song every day for a year is no mean feat. With February Themes, John Micah Rapp has not only completed a month’s quota, but he has also provided enough sounds to keep each song interesting.

Describing his music as ‘stoner rock’, some may consider Rapp to be perhaps too self critical- although his songs do have a certain edge, by no means do you need to be under-the-influence to enjoy them.

The lack of vocals in February Themes is, for me, a minor downfall, given the careful composition of the songs. At times, something to create a story or a narrative that can develop throughout the month is needed to turn this from a good album to a great one.

At over ten minutes long, opening track “ February 1- Can’t Concentrate With You Here” sets the rest of the album up well, with an eerie energy, and, like much of February Themes, it has a quality usually found in film soundtracks.

This can be said for much of the album- in places the music seems to slip into your subconscious, and your feelings start to align themselves with the tempo of the songs. “February 14- Mexican Sky…” is a notable example of this.

Songs such as “February 17- Suction box” do tend to drag in places, and feature some rather disruptive changes in sounds, suggesting perhaps Rapp had too many ideas to put coherently into one song. The sheer length of the songs also makes it nigh-on impossible to listen to February Themes as a whole body of work- instead it has to be heard in stages, which does detract from the album’s achievements somewhat.

For an album of this length, it is a surprise that there aren’t fewer ‘filler’ tracks. It seems Rapp has accomplished something in one month that many musicians spend years perfecting- producing an album that isn’t full of tracks that can be skimmed over and ignored. February Themes demands your attention from beginning to end, and with a combined length of over 3 hours, it demands a lot of attention.

Whilst February Themes has its faults, it is a powerful composition, one that can blend effortlessly into any environment or setting. If John Micah Rapp manages to fill a whole year with material similar to February Themes, then it must surely be considered a successful year.