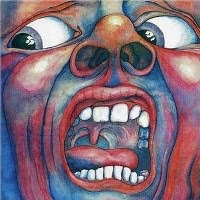 The first incarnation of the legendary King Crimson was Robert Fripp (guitar), Ian McDonald (reed, woodwind, vibes, keyboards, mellotron, vocals), Greg Lake (bass, lead vocals), Michael Giles (drums, percussion, vocals) and Peter Sinfield (words and illumination).
With a prolific cover and the music to match, In The Court of The Crimson King (1969)was destined for immortality and I think it’s safe to say that the recording has reached that lofty status. To think for a moment that this cornerstone of progressive rock was a debut boggles the mind. Now when you hear it in dazzling 5.1 surround or any other mix you prefer actually, it will most certainly reconfirm how important this work was. They decided to cover all bases on the special 40th Anniversary Edition offering several different audio versions, alternate versions of tracks and video footage along with an enjoyable booklet to accompany this well packaged set. I do not think you will find a better version this great album at this point.
I found once again with this series of releases that the DVD was nothing but full of frustrations and with many issues. I was able to listen to the tracks in 5.1 surround sound at one point but beyond that it gets to where don’t want to bother so I ended up listening to the CD several times. Listening to In The Court of The Crimson King time after time is never a problem, just a joy. Greg Lake’s voice is distinguishable amongst world class musicians and it always has been. I think people tend to forget that before he became a superstar with his mates in ELP he did a few other things including being a founding member of King Crimson.
“I Talk To The Wind” and “Epitaph” shows how Lake’s vocal style and the backing instrumentation echoed the Moody Blues dramatic orchestrated classic sound. In this case familiarity did not breed contempt; in fact the opposite effect took hold and this album received elevated international recognition.
“The Court of the Crimson King” is a majestic and unforgettable amalgam of rock and progressive variations ranging from beautiful flute interludes that stop and jump back into cascading guitars, bass, and keyboards while Lake’s significant vocals tell the story, and oh so well. This music and all its trappings took you to places that live in only the mind’s eye. Even if you were never one that had a good imagination songs like “The Court of the Crimson King” would allow passage to a wonderland that is normally reserved for preschool children that have yet to be corrupted by outside influences. That kind of innocence and purity is lost all too soon these days. The music found on this outstanding debut challenges the infinite possibilities of the mind. Yes, it is that good and anyone that enjoys progressive rock fused with elements of jazz and classical will appreciate one of the bookends of the progressive rock genre. Even a “21st Century Schizoid Man” could find a place to live inside this music.
Keith “MuzikMan” Hannaleck
4.5/5 Stars
April 13, 2010
By Keith "MuzikMan" Hannaleck at April 14, 2010