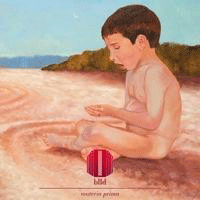 Progressive rock aces Blld play with so much intensity on Materia Prima you might need an intermission to collect your wits.  It's like experimental rock concentrate, hours of artistry boiled down to just 20 minutes of potent fusion syrup.  This album is not easy listening.  In fact, this style might call for a new label along the lines of “tough listening.”  That's not a put-down at all, it's a way of saying Materia Prima is decidedly not smooth background music.  Layers of atmospheric sounds, off-kilter grooves, and bizarre melodies intertwine like a long-unattended garden growing out of control.  It challenges the listener and pushes buttons and boundaries.

Blld is a duo project from experienced progressive rockers Markus Reuter and 05ric, aka Ric Byer.  Both musicians have been out there making exciting new sounds for some time, and have teamed with other well-known artists.  Reuter is known for his touch guitar and bass playing.  He even contributed to the design of a new model of guitar created especially for touch guitar technique.  Touch guitar is an advanced method in which notes are played by tapping the strings instead of plucking them.  With echo and reverb it sounds almost like bells or an electric keyboard.  Both hands can tap in concert so many more notes can be played than with standard guitar picking.  It's a style that lends itself to virtuosity, but Materia Prima isn't heavy on shredding.  Reuter only takes one real extended guitar solo, although it is a burner.  05Ric is, however, constantly burning on the drum set.  Don't expect to find a backbeat anywhere in these seven tunes.  You frontal lobe might bounce and shake but not your body, it's not dance music.

“Identity” is the first tune and one of my favorites.  From the first second it's a frenzy of percussion and airy sounds.  All the playing on Materia sounds improvised and organic, but the structures of the songs are carefully pieced together.  The first third of “Identity” is halting and frantic then a fuzzy bass pops in with a relatively serene melody.  The song concludes when the drums and fuzz sound drop, and the   resonating drones gradually fade out.  Some of the album might sound almost scary to the uninitiated, like most of the tune “OHM.”  It's a frenetic orchestral free jazz metal nightmare, not intended for expecting mothers and those with heart conditions.  The vocals are strange dissonant choruses buried in reverb.  The same vocal sound pops up a few more times on the record.  There are more accessible parts mixed in, too.  “Reverence” is calmer and quieter than the other songs, mostly because 05ric sits it out.  No pounding drums, just a fluid blend of textural synths punctuated by scattered guitar riffs.  The album ends with a sudden cut at the end of “Resolve,” as if Materia Prima was a random slice from a longer album.

Don't let the mystery and intensity of Materia Prima scare you away.  Whether raucous or quiet and severe, there's a method to this madness and some interesting bells and whistles (literally and figuratively).  Most listeners will have to get accustomed to their sensibility, but maybe that's the point.  Blld has thrown down the gauntlet and challenged anyone who hears Materia Prima to a new musical adventure.  You might be surprised what happens if you venture out of your comfort zone and give these new flavors a chance.