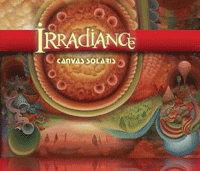 Canvas Solaris is a 5-piece group hailing from Statesboro, Georgia. Formerly a technical death metal band, Canvas Solaris now focuses on instrumental progressive metal. Their forthcoming release, Irradiance, is a full-on abstract metal assault. The album is reminiscent of Liquid Tension Experiment, with a harder edge. The overall result is a progressive metal experience that includes traces of Swedish-like technical and melodic death metal.
Sonically, Irradiance delivers a very clear mix to the listeners. The drums, in particular, were treated well in the recording and mixing stages. The snare is fat yet not muddy, the kick drum exhibits both attack and body, and the cymbals are easily distinguishable. The learned ear can tell the china from the crash on Irradiance, which is not true of all metal albums. While many metal albums tend to clutter mixes at the expense of bass guitar, Irradiance actually features the bass guitar for solo passages and unison runs. Guitars and keyboards on the album work well together in the mix. Rather than fighting for frequency space they compliment each other both in musicianship and tone.
Irradiance delivers very strong performances of each Canvas Solaris member. They are clearly a band that has been playing together for years as demonstrated by the tightness of their fills and runs. The guitar solos lie somewhere between Dragon Force and Blind Guardian, using flurries of speed to enhance musical tension while also layering guitars to create textural effects. Overall, the effect of the guitar playing on this album resonates virtuosity. There is not a weak link in the band, each player conveying both flash and taste.
Structurally, many of the songs begin with a series of dissonant riffs and grooves layered with spacey synthesizers. Choruses tend to be melodic in the style of melodic death metal or metalcore groups. Interspersed between (and around) these segments are a variety of riffs and departures which make the album feel truly progressive. The song “Null Proximity” breaks the pattern, however, with a highly textured mellow ambience. Organs, synth, acoustic guitar, and percussion lead the listener through a dark labyrinth of sound. The album may have benefited from more material constructed in this fashion, as the effect was spectacular.
Irradiance by Canvas Solaris is a great album to add to any respectable prog collection. The instrumentalists are all top-shelf and need to be heard by the masses. The songs are experimental, and the album succeeds a post-structuralist work through combining unlikely influences. Progressive fans need to get a hold of this album upon its release.
4.5/5 Stars
Key Tracks: Null Proximity
Matt Shelvock-May 19, 2010
By Keith "MuzikMan" Hannaleck at May 19, 2010