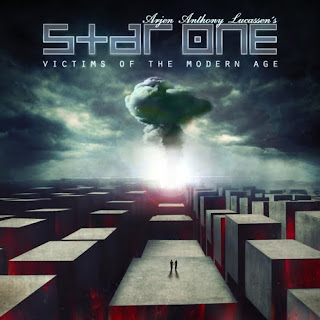 With a career spanning more than three decades, composer and multi-instrumentalist Arjen Lucassen has firmly established himself worldwide as driving force in progressive rock and launches his musical spacecraft towards the galaxy of bombastic sci-fi rock again in 2010. STAR ONE "Victims of the Modern Age", the follow-up to the STAR ONE debut album, "Space Metal" (2002) will be released on October 26th in North America via InsideOut Music.
For "Victims of the Modern Age" Arjen Lucassen reunited the stellar cast of lead vocalists from the first album: Russell Allen (Symphony X), Damian Wilson (Headspace, Threshold), Floor Jansen (ReVamp, ex-After Forever), and Dan Swanö (Nightingale, Second Sky, ex-Edge Of Sanity).
On top of this formidable cast, Lucassen recruited three other singers, for some additional tracks to be featured on the album's CD2 (Special Edition only). These tracks are by no means just leftover "bonus" tracks; they are, as Lucassen puts it, "songs that didn't fit in with the overall sound and concept of 'Victims of the Modern Age,' but were simply too good not to use. These songs also gave me the chance to work with other fantastic vocalists who aren't part of the actual STAR ONEline-up."
In his latest video update, Arjen introduces two of these singers - the third singer Arjen DOESN'T mention by name - in the first video contest your task is to guess the identity of this mystery singer. The first participant of the contest, who guesses the identity of the mystery singer correctly, wins a free copy of Victims of the Modern Age. Here is how to participate:
Watch the video posted on Arjen's YouTube channel, where (after some yakkin' by Arjen) you can hear the mystery singer
http://www.youtube.com/watch?v=kTij0HBqP_w
Go to Arjen's Message board and post your guess in the official Contest thread
http://www.arjenlucassen.com/board/viewtopic.php?t=4422
Don't forget to post your contact info so we can reach you, in case you are the winner. You do not need a user account to participate.
For those who can't watch the video, the two singers Arjen introduces are Rodney Blaze <http://www.myspace.com/rodneyblaze1>  and Mike Andersson <http://www.myspace.com/anderssonsinger> . Each of them sings one of the five extra tracks that appear on CD2 of the Special Edition version of the album.
Stay tuned for further Star One contests and updates!
Arjen Lucassen's Star One "Victims Of The Modern Age" (InsideOut Music)
Release Date North America: October 26th 2010
Release Date GAS: October 29th 2010
Release Date Europe: November 1st 2010
FOR MORE INFORMATION AND REVIEW COPIES PLEASE CONTACT JON FREEMAN AT FREEMAN PROMOTIONS:  FREEMAN@FREEMANPROMOTIONS.COM OR 732-360-7640
Jon Freeman
Freeman Promotions
328 Long Branch Ave.
Long Branch, NJ 07740
By Keith "MuzikMan" Hannaleck at September 07, 2010

Email ThisBlogThis!Share to TwitterShare to FacebookShare to Pinterest
Labels: ARJEN LUCASSEN'S STAR ONE