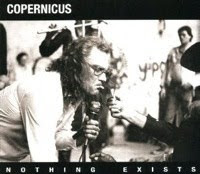 Nothing Exists, the new (yet old) LP from Copernicus is easily one of the coolest albums I have ever heard.
Originally released in 1985, Nothing Exists was Copernicus’s first album, paving the way for the eleven albums that would follow. After releasing a new album in 2009, Copernicus went back to the beginning, digitally re-mastering and re-releasing Nothing Exists.The album is an extremely interesting fusion of spoken word (Copernicus the vocalist started out as a spoken word artist) and progressive rock, which is simultaneously very chill and incredibly intense. From the first track, “I Won’t Hurt You,” is an excellent song on its own, but hardly sets the tone for the rest of Nothing Exists. On “I Won’t Hurt You,” Copernicus is seductive, smooth, and even sexy. The rest of the album doesn’t follow suit.Instead, the majority of Nothing Exists shows off the strength of Copernicus’s voice. Often, there’s a certain power lacking with spoken word, but this couldn’t be farther from the truth for Copernicus. Rather, there is an intensity that reverberates with every word, and a dynamism that allows Copernicus to maintain the same power whether he’s talking easily or yelling.While Nothing Exists is clearly focused on the words of the tracks, it’s impossible to ignore the instrumental factor that accompanies those words. Although Copernicus’s band mates, Larry Kirwan and Pierce Turner, lay out a basic concept for each song, the musicians who collaborate with Copernicus ultimately create their own part for the song. The result is a diversity of sounds that alternate between sounding perfectly meshed and totally clashing, but even when the instrumentals clash the overall effect is still something amazing.Nothing Exists is intriguing, diverse, psychedelic, and even a little creepy at times. It’s unlike any other album I’ve heard, and it is most definitely worth checking out.4/5 StarsHot Tracks: Blood, I Know What I Think, NagasakiCarly Doenges-9/17/10
By Keith "MuzikMan" Hannaleck at September 17, 2010