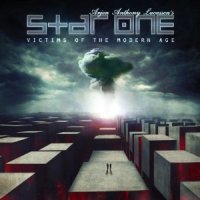 After a short respite into a different side project called Guilt Machine, Arjen Lucassen returns to the familiar ground of Star One. This time out it’s called Victims of the Modern Age. It has been seven years since the Live On Earth album was released. It was worth the wait, no surprise there. This is not predictable and quite unlike its previous lineup and sound.
Arjen is brilliant once again, isn’t he always? Just when you think he is due for some kind of let down, a project that his longtime fans won’t like so much, he puts it all to rest in a heartbeat. Arjen gives his listeners something to enjoy with a few new twists and turns but mainly it rocks and that is the most important factor.
Victims of the Modern Age is another multi-dimensional star studded affair that maintains a theme from start to finish complete with heavy metal guitars, driving spacey keyboards, all the great music you would expect from an Arjen Lucassen project. The theme or concept if you will is not too hard to figure out from the title. What transpires are the ravages of time and the ecological breakdown of mother earth and all its trappings that bring us to our eventual demise as a human race. Arjen has been professing the eventual takeover of our technology driven society and our inevitable demise for a long time (“It All Ends Here’), warning of our self destruction (note the ominous mushroom cloud on the colorful futuristic cover), and the fear of waiting for that one maniacal futuristic god that falls from the sky to push the button and end it all. He is like a modern day Jules Verne writing a script for the future that does not seem too farfetched at this point. Do note in his stories that he always leaves the door open for man to make things right (“24 Hours”), he always did. Let’s hope in the present real world we will wake up before it’s too late.
Besides the genius of Arjen Luccassen steering his troops into a space metal galaxy once again you have some familiar names that are part of the crew. The ever changing vocal parts and music that matches each unique voice and character, are handled by Damian Wilson (Original Star One crew member, Threshold, Headspace), Russell Allen (Symphony X), Floor Jansen (ex-After Forever, ReVamp), Dan Swanö (Nightingale, Second Sky, ex-Edge of Sanity) and some special guests on the bonus disc including Tony Martin on “Closer To The Stars” (formerly of Black Sabbath).
The first disc is full of energy and fat metal power chords. Tracks like the catchy yet divergent “Digital Rain”, “24 Hours” and “Alive, She's Alive, We're Alive” will get inside your head and will refuse to leave. Then the “bonus” disc is just as good as the main CD and continues in the same fashion, in fact I enjoyed it even more. “Two Plus Two Equals Five” is an amazing track. The hypnotic drones of the guitar and deep undertow of the bass and drums pushes the unique “from the bowels of hell” vocals from guest vocalist Rodney Blaze to make it the most unique track on the entire set. You know, I can hear Ronnie James Dio (god rest his soul) singing some of these songs. Just imagine how glorious that would have been?
You have to love the way they wrap this set up with the ELP classic “Knife Edge” (courtesy of Damian, Arjen, Floor and Russell). Arjen and his band do an amazing workup of that song and it’s a fitting way to close the curtain on yet another flight across the heavy metal prog universe. There is no getting around it; the more you listen to this music the more it digs its way into the fiber of your soul and cover tracks like “Knife Edge” is just the icing on the proverbial prog rock cake. Time to climb aboard the Star One flight again; it’s the only way to fly!
5/5 Stars
Key Tracks: 24 Hours, Two Plus Two Equals Five, Victim of the Modern Age