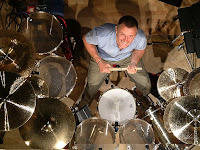 As posted to the We Will Rock You blog by Sterling: "The progressive rock supergroup Emerson, Lake and Palmer performed a highly-anticipated one-time reunion gig at this summer’s High Voltage festival in London, leading to rampant speculation that the groundbreaking trio might launch a full-blown reunion tour. Not so, says drummer Carl Palmer.

"Speaking exclusively to Dave Ling at Classic Rock Magazine, the legendary drummer said it’s just too difficult to get the band functional after so many years away. The High Voltage gig marked the first time ELP had played together onstage in a dozen years, and the resulting gig received mixed reviews from fans and critics alike, with many pointing out that the band just wasn’t as tight as it had been in its prime. Keith Emerson has struggled with nerve damage to one hand for years, which was apparent onstage despite his best efforts.

"'Well, for reasons I won’t go into it’s always hard to rev it up. We rehearsed for it for a month, which almost killed me,' Palmer stated. 'Not the physical side of it, just keeping interested. Me personally, I didn’t need a month. But that’s what we did, and when it came to the gig what you saw was what you got. That’s as good as it will ever be. Everyone seemed pretty happy with it, and I think that gig will be far as the three of us can take things.'

"Palmer said that Emerson and singer Greg Lake, both of whom perform infrequently these days, were very nervous for the High Voltage performance, adding to the problem. 'Not from me, I’m not the nervous type. I play all the time,' Palmer pointed out. 'Asia have played more than 200 gigs since the reunion, and of course I’ve also got my own band. For me, like I said, it was the month’s rehearsal and not the gig that really frustrated me.'

"The drummer also told Ling that the band is currently editing a CD/DVD of the High Voltage performance. 'And that’s about it, really. There are no plans to do anything else, not from my perspective anyway,' he added. 'I’ve let the other two know that. Being the 40th anniversary, it seemed a great way to finish things. Let’s just leave it there.'

"Carl Palmer recently released a new live album, Working Live Volume 3, which features his new band re-interpreting the works of ELP in an all-instrumental rock guitar setting. He is set to tour with Asia in December."