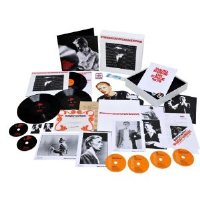 April 21, 1976 in Springfield, MA I saw David Bowie on his Isolar tour and two days later he played in Nassau, NY. Little did I know then I would be sitting here 34 years later listening to that performance in Nassau on CD and 180 gram audiophile vinyl. I was fortunate to get home in one piece after that concert but that is another story.

I have reviewed several reissues over the years and box sets but I have never come across anything like this Station To Station Deluxe Box Set before. I have to say if I was not in this business I would have bought this on the spot. It helps to be a huge fan of Bowie of course and when they say this is the ultimate fan experience they are not kidding. There is an entire list of goodies in this package (see list below) that would satisfy any Bowie fan not to mention average music fans. You don’t have to be a fanatic of this music to desire something this unique. The lyrics are part of the package and that is a blessing because some of the songs I always had a hard time understanding, particularly “TVC15” I can actually sing along now without stumbling over the lyrics.

The Station To Station box set should find its way under a lot of Christmas trees this year. There are several versions of the original recording included here. The original 1985 RCA CD Master is one of them. I actually had it and it was one of the first CDs I ever bought, because you guessed it, it has always been one of my favorite all time albums. Then there is the 5.1 Surround Sound version on the DVD offering up several different configurations including 96/24 LPCM Stereo, 96/24 DTS 5.1 Surround Sound, 48/24 Dolby 5.1 Surround Sound and 48/24 Stereo LCPM. I am baffled as to why I was unable to listen to the 96/24 versions as I have done it before from the Media Player to stereo without a problem. I believe it’s a technical issue with my PC because I have been down this road before so it surely is not the DVD itself. So I listened to the 48/24 version and was amazed at the overall clarity and separation of sound. I am hearing things I have never heard before, which can be a revelatory experience for someone that has been listening to an album since its release. Yes, I had the original vinyl version back in 1976 and wore it out.  There was something fresh and different about Station To Station back then and that still holds true today. Also the analogue version is included on CD and LP. There is just so much here I am afraid I will forget something!

Bowie has never been a follower he was always the leader and innovator. With this stellar recording and performance he created sheer genius in the studio. His backing band was nothing to sneeze at either with Carlos Alomar and Earl Slick peeling off riffs that rivaled any top rock band of the day. Listen to the six string excellence on “Stay” (and the bass is allowed to be predominant as well in the mix). The album would also render one of Bowie’s biggest hits “Golden Years”, which actually sounded like it belonged on his previous release Young Americans. This definitely reigns supreme as Art Rock and I would venture to say that it could be easily considered as progressive rock due the eclectic musical content and spaced out lyrics. It stands as Bowie’s crowning achievement and that is the very reason it is getting the royal box set treatment.

The LPs and CDs for the previously unreleased Live Nassau Coliseum '76' Concert is worth the price of admission for this set (listed at $149.49 at Amazon). Bowie and his band are in fine form, just as I remember that concert a few days before in Springfield, MA. I have mentioned that concert on a few occasions covering other Bowie reissues but now it really comes back to life for me with this set. I did not remember the date (I am lucky to remember the concert!) so I did a Google search and found a reference to it on Wikipedia. I love the internet!

Station To Station was a dark time for Bowie and the album was a very personal project (and a very personal favorite for this fan). I remember reading somewhere that he did not remember 1975 and if that has any truth to it he must of came out of his drug filled haze for a while to create this rock (sprinkled with funk) masterstroke.

This is a must have for any Bowie fan and to be perfectly honest I do not think its pricey for what you get in return not to mention the very best recording the artist has ever released. Station To Station would start the path to many interesting projects where Bowie would continually experiment and reinvent himself but this remains one unforgettable work of art that is now distinguished in the most lavish box set I ever seen.