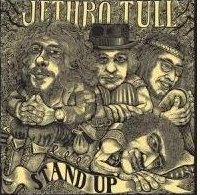 With the departure of Mick Abrahams (who would go on to form Bloodwyn Pig) Jethro Tull would usher in a new guitarist named Martin Barre for their second studio release.

Stand Up would find the group heading more to their soon to be realized progressive rock sound that started to take form.

Ian Anderson (vocals, flute, acoustic guitars, keyboards, balalaika), Martin Barre (electric guitar, flute), Clive Bunker (drums), and Glen Cornick (bass), pushed Jethro Tull to new heights with Stand Up. The blues-rock foundation was still there however new roads where being travelled and very successfully. “Fat Man” and a fresh take on the classical “Bouree” were some of the highlights this recording had to offer. As Ian Anderson comments on his interview with the DVD included in this set, Abrahams was not willing to progress and go in another direction with his style. He was content being a blues rock guitarist and that is where he wanted to remain. So with that as a starting point Jethro Tull started on a new adventure after having released only one album. The decision would be the most prolific in the band’s short lived career, changing their sound and chemistry entirely.

This three disc set, 2 CDs, which includes tracks from their Top Gear BBC Radio session and 1 DVD, was meant to be released as a celebration of the Stand Up 40th anniversary last year. Well as they say, better late than never and it is quite an enjoyable set. It was worth wait. You get the remastered original album from 2001 and a 1970 performance at Carnegie Hall. On the DVD you can listen to the Carnegie Hall concert (audio only) in different formats. Your choices are 48/24 Stereo LPCM, DTS or 48/24 Dolby Digital which I chose to listen to after hearing the normal stereo version on the CD. It might seem like too many choices for some folks but everyone is different and has various listening options dependent on their stereo and computer systems, so in that sense it is good thing. The improvements are noticeable in sound quality and the concert was a great treat.

Stand Up was an amalgam of rock, folk, classical, jazz, and blues that distinguished JT from all the other bands. This would be the pre-progressive rock sound (as Ian says in his interview) that would eventually develop further with each successive release. Ian also explained how they were not the same type of band as ELP or Yes, they were more vulgar and would be comparable to bands that became popular during the 90’s grunge period like Pearl Jam and so forth. This I thought was an interesting comparison because I never really looked at it that way. I always considered JT as prog rock but you have to remember from whence they came and the roots of all their music that brought them to a mature progressive sound on their Thick As A Brick release. All the albums prior to this were a developing and experimental stage that combined various elements to afford the band their own unique stamp, not to mention Ian’s vocals, on everything they did.

Stand Up was clearly a step in the right direction for Jethro Tull and it is fitting that a new set such as this was released to document it. The trifold cardboard case unfolds and the band pops up (Stand’s Up). A booklet is included as well featuring a write up from Ian. All things considered this is a prized possession for all JT fans.