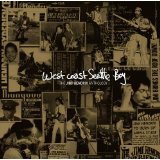 Those of you that have been chomping at the bit for more unreleased Hendrix material will be happy to know a new 5 disc set, 4 CD’s and 1 DVD, is now available titled West Coast Seattle Boy. This comprehensive anthology covers the period of 1964-1970. You learn through listening and watching the DVD that there were many things in store for Hendrix fans prior to his death and we can only wonder now what would have developed over the years with this astonishing artist.

The first disc features early Hendrix as a sideman, imagine that? Playing with popular artists like The Isley Brothers, Little Richard and Don Covay. This is a very good glimpse at a young man that was in the background playing a very restrained guitar/role in various settings. This time period would serve as motivation for Jimi to do his own thing.  At times his host band would cut him loose and you get an idea of how good Hendrix was going to be. As we know he exploded onto the music scene in London once he set forth on his path and spread his wings. The early material is very good. Most of it is early soul and R & B that still has a way of getting you in a groove no matter how many times you play it. That is a tribute to how good the artists that worked with Jimi were and their music still has relevance to this day.

Essentially discs 2-4 are all unreleased tracks (45 in total), a literal treasure trove of Hendrix gems from the studio and live archives. There is no doubt in my mind that this man lived in the studio. He ate, slept, and breathed music. He was beyond being an innovator; Hendrix was the inventor of many technologies and techniques of the six-string. The effects he came up with were difficult to attain with the equipment he had at hand. Doing things like playing loops backwards and such are nothing these days but where would guitar players be today without the God like recordings of this man? I will give you a perfect example of how far ahead of everyone else Jimi was, on disc three there is a track titled “Young/ Hendrix” that is an instrumental jam that clocks in at 20:53 that puts everything into perspective. The “young” and “developing” artist peels of mind boggling licks and jaw dropping solo’s to create a masterpiece of jazz-blues-rock fusion that would have any Berklee College of Music student drooling. Now this was 1969 mind you. Hendrix was accompanied by Buddy Miles on drums and Larry Young on organ and an unknown bass player. I for one never get enough of this material and that track simply blew me away and was the highlight of the entire set. There were many more tracks that amazed me but this one took the cake. “Little One” (Anthology Version)” really stuck with me as well, It is fine instrumental with tremendous leads flowing through it along with a sitar (courtesy of Dave Mason of Traffic at the time)  to give it a psychedelic Beatles like groove. This sound is something that I have never heard from a Hendrix recording. Trust me though there are many revelations available throughout this beautiful set.

The CDs and DVD come housed in a book format with archive pictures, notations on every single track, a basic run through of history for the listener to enjoy and an excellent look into the genius of Hendrix and everything he did in the studio.

The DVD is very interesting as well. The disc is 90 minutes of Hendrix footage, thoughts, interviews and quotes taken right from the man himself. Bootsy Collins of Parliament-Funkadelic fame does the narration as Jimi. I found it very eye opening and refreshing to take the journey the DVD provides. I am still saddened to this day that we lost one of the most exciting and creative minds in music but I am also grateful for all the incredible music he left behind for us to ponder.

There is a lot of ground to cover in this set and it offers the music of Hendrix in a nice package to enjoy with every facet of media available through music, video, pictures and reading that would please anyone, in fact this set goes beyond the norm and I think most people will be pleased at the overall quality of the music and presentation.

I honestly do not feel I can do this awesome work of musical art justice with my words alone considering the significant contribution it makes to the Hendrix legacy. You have to experience it yourself to understand.
Again we are left in total amazement at the music of Jimi Hendrix made and how more and more is unearthed as time passes. Even though it was over 40 years ago since his untimely passing we wait in anticipation for what could be next.