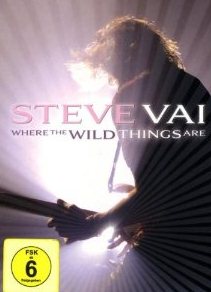 Steve Vai's DVD Live In Minneapolis: Where The Wild Things Are has gone Platinum; amongst the various version there is now also a double, 180-gram coloured vinyl set. This weekend Via is unveiling Expanding The Universe with the North Netherlands Symphony Orchetsra in Holland. "During this inaugural Steve Vai Festival you will hear Vai world premiere symphonic pieces composed specifically for the event. Later on in the week there will be a Vai-competition called "Naked Tracks," and a documentary on the history of the electric guitar. For more information about the 'Steve Vai Festival' visit http://www.stevevaifestival.nl
A fairly recent interview with Robert Webb [of the prog band England] about the band's famous first album, Garden Shed (released 1977) has recently been posted up on a 'prog' site. Japanese magazines have published several interviews (mostly 2005/6), but this is the first internet interview in English since the 70s. Also features some unpublished pix. Look under 'Specials' at www.backgroundmagazine.nl. [Source: England]

According to Billboard.com, Rush's "Time Machine Tour"[, which] played North American venues from late June through early October, grossed a total of $18,989,834. The top gross among the reported concerts came from a two-performance engagement at Red Rocks Amphitheatre in Morrison, Colorado, with sales of more than 16,000 tickets for both shows (August 16 and August 18). The largest amphitheater crowd for a single performance came from the Houston market with 15,225 fans in attendance at the Cynthia Woods Mitchell Pavilion on September 25.

The "Time Machine Tour" kicked off on June 29 in Albuquerque, New Mexico and finished on October 2 in West Palm Beach, Florida, hitting a total of 37 cities. The centerpiece of the trek was the band's first-ever performance of its classic 1981 album Moving Pictures in its entirety. The group also played other beloved tracks from its catalog as well as new songs that the band has been working on.

This was Rush's first road trip since touring extensively behind its 2007 studio album, Snakes & Arrows. [Source: via Blabbermouth.net]
By Keith "MuzikMan" Hannaleck at November 08, 2010

Email ThisBlogThis!Share to TwitterShare to FacebookShare to Pinterest
Labels: Live In Minneapolis DVD, Steve Vai, Where The Wild Things Are