The Transatlantic tour took place in April following practice sessions in Southern California then finished up in July. This is all documented on this set.

The TA performance from Shepherd’s Bush Empire in London includes 147 minutes of footage from the first set on disc one. Keep in mind that this band has not performed together in over 9 years so what you will see is quite incredible based on that fact alone. Those of us familiar with all these fine musicians and their projects know how good they are and we should not be surprised that this performance is nothing short of spectacular. As a bonus Steve Hackett (formerly of early Genesis, when they were prog) comes on stage to perform a Genesis classic “The Return Of The Giant Hogweed” at their High Voltage Festival performance, the last stop on the tour. Of course, Hackett is simply amazing and Portnoy and everyone else are just beaming with delight to have him out there playing a prog-rock gem like that.

The first set kicks off appropriately with “The Whirlwind”, the title track from their ambitious 2009 double studio album (see review). The next three tracks ‘All Of The Above”, “We All Need Some Light” and “Duel With Devil” are extensive and solid proof of the band’s prowess as musicians and entertainers in that configuration even after a 9 year layoff. It’s a given that any prog song live is going to have improvisation and a guarantee that it will be an extended version of an already extensive track. This of course is what everyone wants in a live session and Transatlantic does not disappoint for one second. What I appreciate with this band is that they are not flashy or bombastic in any way; they just play good music with a flair for mixing classic prog with modern day twists and turns.

The second DVD is160 minutes in length bumping up the ante for the entire prog package which includes a road documentary (ala homemade via a lot of Neal’s own video camera), a band interview, and the aforementioned bonus track of the Genesis classic.

“Bridge Across Forever” is an amazing track with shifting atmospheres and outrageous time signatures flying around. The jaw dropping changes are indeed a highlight, although this is typical for a band like Transatlantic, and they make their own way with a definitive stamp that nobody can reproduce.

This is a very special group of individuals and I wish that I would have caught this show live because who knows when it will happen again. Perhaps now that Mike has left Dream Theater some good things could happen (although that saddens me) or some other interesting configurations may come to light suddenly. These prog rock dudes really get around and you just never know when one of them is going to pop up on another project or play with a band you are already familiar with. 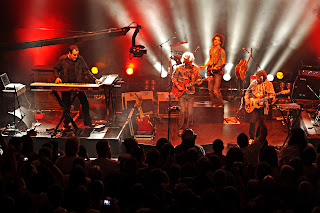 My hat is off to the band for adding Daniel Gildenlow to the concert tour. He adds yet another facet and energy to the already outstanding sound they create. His contributions on guitar, keys and backup vocals give their sound an additional texture and layer that is welcome in the live setting. I have no doubt that if TA goes back into the studio, they should consider asking Gildenlow to join them.

If you have been waiting for this to happen, the time is now to grab this DVD set and experience Transatlantic live along with all the other bonuses they offer. The up close coverage you get during the tour makes you feel like you are hanging out with the band, it was a nice touch to get closer to their fans and they should be applauded not only for their musical brilliance but how in touch they stay with their audience.

I have always been so impressed with each member of this band, their humbleness and appreciation for what they do, how they present it, and most of all what they give us in return for supporting them. Thanks to Transatlantic, I have many memories and fantastic music that I can enjoy for the rest of my life. Try finding that on any radio station these days.