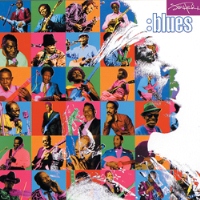 When people think of Hendrix psychedelic rock is one of the many things that come to mind. And thinking along those lines of what a great rock guitarist he was can steer you away from the fact that everything Jimi did was rooted in the blues. He took everything to another level, especially the blues. Those that recorded with him well tell you that without hesitation. His longtime friend and bass player Billy Cox perhaps said it best - “You can call Jimi Hendrix whatever you like, but he was a bluesmaster. That’s what he was. A hell of a bluesman.”

With the repackaging of Jimi Hendrix: Blues in a CD/DVD remastered deluxe package you can explore that statement further and crystalize it in your mind. The package includes a booklet with plenty to absorb including a track by track rundown and a DVD. Although the DVD is short lived it is another glimpse into some live footage of Jimi along with interviews that delve into where Jimi was coming from with his music.
Hendrix loved Muddy Waters, John Lee Hooker and other legendary blues players. He learned their music at a very young age with a $5 acoustic guitar his father bought him. His father also encouraged him to develop his own style and he took that to heart.

The eleven tracks presented in this package will give insight into the blues and the Hendrix style and how his unique musical voice spoke for the genre and an entire generation. For instance with “Hear My Train A Comin’”, you get a good helping of it in its modernized rock-blues form and then again in an acoustic setting to remind you how the electric version was realized in the first place. The blues Jimi really appreciated were played on the acoustic guitar. Everything starts somewhere and with the two contrasting versions of this track you are taken from a foundation to the musical stratosphere. Hendrix did that with all of his adaptions of blues tracks, using electronics and studio manipulation and his incredible guitar playing. And let us not forget how brilliant he was bringing that music to life onstage, yet another seemingly impossible feat at the time.

To break it all down is no easy task but I can tell you every track is smokin’ hot blues and acoustically it is best illustrated by “Hear My Train A Comin’” and again with the same track which is an electric guitar production clocking in at 12:08. The rousing instrumental “Jam 292” is equally masterful and will certainly blow you away. There is much more to be enjoyed throughout this set however I found those three tracks the most exceptional.

If you are a Hendrix beginner or longtime listener, Blues will bring you down to earth then to the ends of the musical universe in one sitting. Jimi had a way of doing that with his music. This a good starting point before exploring the entire Hendrix catalog. You have to build a foundation first before a house goes up and in the case of Hendrix it was already built in his mind before he walked into the studio. You hear it all like never before on 11 amazing tracks that need several listens before you fully understand the impact and importance of the blues on the music of the late great Jimi Hendrix.