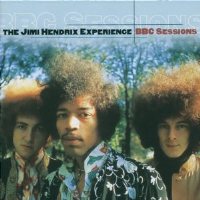 The Jimi Hendrix Experience BBC Sessions is now available as a two CD and DVD set.  This package puts together all of the tracks from the BBC Hendrix archives, along with a fascinating account of the sessions in a booklet laden with pictures. In addition to that you get a DVD that sheds further light upon that time and those now legendary sessions.
The sound quality is excellent on this set given that they are live off floor recordings. While a full bodied sound is maintained the excitement and rawness of the tracks are still intact. All of this music was recorded in London at the BBC studios in 1967 prior to the release of the first studio release from the band Are You Experienced. If you stop for a moment and think about that, it is quite incredible that they had not released their first album yet. After listening to all the tracks you begin realize why everyone was so awestruck with Hendrix and what his band was doing at the time.
In addition to the music the Hendrix personality and sense of humor is on display on the recordings and footage provided from the BCC tapes with Lulu. The instant formation of the “Radio One (jingle)” on the air while recording or the barking on “Hound Dog” are good examples of the ongoing lightheartedness. Everything you will hear is impromptu jams on this session and several tracks that were never attempted live. It is also interesting to watch what transpires on the show with Lulu. Hendrix decided to ignore industry standards and the show guidelines while launching into a free form intro for “Hey Joe” that the rest of the band did not seem too sure how to follow but they managed to pull it off just the same. Then to make it more confusing Hendrix decided to suddenly abandon “Hey Joe” entirely and go into a tribute to Cream with “Sunshine of Your Love”, all the while the director was waving his arms for the band to stop. We can witness here again the absolute genius of Hendrix playing these songs in such an “off the cuff manner” while still sounding so amazingly fresh and innovative. It was displays like this that prove my point that he was one of the progenitors of progressive rock, if not the man that started it all.
What I found so charming about Hendrix and this pre-studio recording time period was how much innocent fun Jimi and the boys were having while simultaneously driving everyone else from the shows crazy. Hendrix was laughing all way and then suddenly became a worldwide sensation after the release of their first album. Make no mistake about it though, this is what started the fire back in 1967 and it’s a flame that has yet to be extinguished.
There is a litany of information and music to take in on this set. The video segment has a few things to be desired like showing footage of songs and playing the backing track that did not sync with Jimi’s vocals onstage. Up to this point the DVD’s that came along with these sets were very good however this one took something away from the quality of an otherwise outstanding set. The interviews were good and informative and made you think more about what was going on in those days, which I thought was important to be able to link yourself to that time and the atmosphere of the sessions.
Once again we get to enjoy the spontaneous combustion of the Jimi Hendrix Experience, a trio that made more noise than bands that were twice their size. Just listen to the version of “Driving South” and tell me who was making music that sounded this amazing back in 1967? In fact, is there anyone today that is even coming close to producing music like this? I think not so enjoy these Hendrix reissues all you can and make sure you listen several times to absorb it all. Excuse me while I go listen to some more Hendrix…
4/5 Stars
Key Tracks: Driving South, Hear My Train A Comin’, Catfish Blues
Keith “MuzikMan” Hannaleck
December 19, 2010