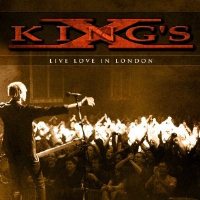 King’s X is like that old girlfriend that you simply lost track of even though you really liked her and thought she was amazingly talented. Then, one day, years later, as you’re putting a full set of fingerprints on some melons at the local grocery store looking for the freshest one, you her a voice come from behind you.  You turn to see that old girlfriend.  You don’t believe it at first because it was the late 80’s and early 90’s when you dated but she looks incredible and sounds even better than she did then.  You saunter over to reintroduce yourself and she smiles and then looks down. That’s when you realize that your zippers down.  But she doesn’t care.  She slips you a copy of King’s X Live Love in London and walks away knowing you’ll never forget her.

Folks, I’d like to say King’s X is back!  But…that’s not true because they actually never left.  They have always been there hoping from label to label releasing great music.  While we got caught up in the wave of boy bands and square dancing, King’s X rocked on knowing that we would come back eventually.  Well, now’s your chance to reintroduce yourself to the boys in the band as they have released a killer live album called Live Love in London. Live Love collects everything you know and everything you’ve missed and puts it together like a crash course in King’s Xology that you are sure to fail on purpose just so you can take it again.

The sound is awesome.  The concert was recorded at the Electric Ballroom in Camden, London in 2009 which is about 20 years since the release of Gretchen Goes to Nebraska.  They have only gotten better in that time is all I can say. The fact that King’s X blast through their early hits like “Black Flag” and “Summerland” with as much beautiful harmony as they originally had when the songs were brand new 20 years ago is amazing.  “Visions” is even more crushing than when I heard it the first time.  The idea of having this riff that could tear apart small towns and make widows out of housewives as the backing track for bassist Doug Pinnick, guitarist Ty Tabor, and drummer Jerry Gaskill to harmonize in front of, is like having a boys choir singing as a tornado looms behind them.  “Moanjam” that follows it carries on the high speed destruction perfectly as if a line of tornado’s are coming to your town and that boys’ choir is going at top volume.

I’d like to give a special mention to “Over My Head”.  It is a nearly 13 minute tour de force that will blow your mind. The song has always been one of their best but on this version they push it over the edge and into a whole other spectrum.  At about 3:30 minutes in, the song slows down and Ty plays some of the most beautiful guitar I’ve heard in a long time.  At the close of that solo Doug comes in with one of the most motivational speeches I’ve ever heard about playing the music you want and doing it your way.  It’s easy to see it comes from his heart and considering he is living exactly what he is saying it’s very deep.

King’s X are musician’s that have never stopped making the music they want to make.  They keep plowing on no matter the trends and currents in popular music.  They are King’s X and they are damn good.  This album is a reminder of doing what you want to do because it makes you happy and judging by my smile and the sound of the crowd on the album, it makes a few others happy too.