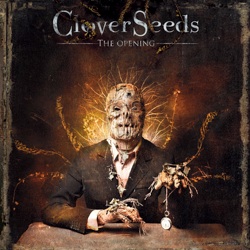 The landscape of progressive rock continues to evolve.  As the dinosaur bands fade away, a new breed of thought provoking artistry has emerged.  Bands like Porcupine Tree, Tool, Riverside, and Anathema are not about complexity or grandiose arrangements, these are bands that aim for your heart as well as your head.  French progressive rock band CloverSeeds is a new band following this course.  The Opening is their second release and first for U.S. progressive rock label the Laser’s Edge.  The label is committed to expand CloverSeeds fan base to a worldwide level.
The band was born in 2004 by members Chris Bodin on drums, Steph Barrier on bass, Fabrice Jacquet on guitar, Pierre Librini on guitar, and Ced Oléon on vocals.  They released two EPs (Shouting to No One - 2005 and Bunkers and Cathedrals - 2007) and released a debut are full-length album Innocence on a small French label.  Their debut release gave the band some national attention including a television appearance on "Ça part en live."
CloverSeeds’ music is a rollercoaster ride of pure emotion filled with melancholy and dark atmospheres augmented with guitar driven heaviness.  The new album was recorded in Germany at Spacelab Studios under the direction of Everon’s Christian Moschius.  The resulting album is an audiophile spectacular polished to perfection by Grammy winning mastering engineer Bob Katz.
For further information please contact:
Lori Hehr
PR4MUSIC.com
TEL: 360-320-6490
EMAIL: LHPR@runbox.com
By Keith "MuzikMan" Hannaleck at December 08, 2010

Email ThisBlogThis!Share to TwitterShare to FacebookShare to Pinterest
Labels: Prog Metal, The CloverSeeds, The Opening