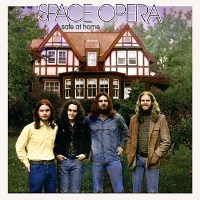 This album isn’t just an album. It’s an adventure split into 15 parts that takes you into the world of Space Opera. Having said that, I have to be clear and say this is not a concept album unless of course you consider assembling a brilliant album from odds and ends found languishing in the studio a concept. I suppose it simply depends on your definition of concept. Safe At Home is the direct result of what you get when you let ItsAboutMusic.com into your house to raid the archives. Clearly you don’t want to compete against them in a scavenger hunt because they will find the best stuff first.
I, having never heard of Space Opera before, was blown away by this album. The four men responsible, David Bullock (vocals, electric guitar), Scott Fraser (lead vocals, keyboards), Philip White (vocals, bass), and Brett Wilson (drums) have an amazing sound that is as vintage as old wine and just as smooth and relaxing. The song they chose to open this album with, “Singers and Sailors/Fathers” has one of the most classic riffs I have ever heard. The great voice you hear belongs to Scott Fraser who, to give you a frame of reference, sounds a bit like Paul Rogers from Bad Company.
The vocals are shared on these tracks by Scott, Phil, and David . All 3 have very distinctive voices and a great example of Phil’s style is “Journey’s End”. I’m amazed as I sit here writing this that I haven’t heard of this band. “Journey’s End” is brilliant. It’s like a long and winding musical journey to the sunset that’s full of amazing harmonies and beautiful 12-string guitar playing. The acoustic part at the beginning has Phil showing a gorgeous quiver to his voice. David shows off his Jethro Tull like voice on songs like “Bells within Bells” and the southern rock flavored “Country Max”. Again I’m left asking myself the giant question of, ‘Why isn’t this being played today?’ One listen to the complex opening harmonies and majestic feeling of “Caldonia” with its great use of flutes and you will be sold on the genius of Space Opera.
Ok, so you’re nervous about jumping into the Space Opera pool. I know it’s because you’ve been burnt before buying these so called “classic” artists that you’ve never heard of that end up not being worth their collective weight in jellybeans. Ask yourself the question, “Do I trust Uncle Doug?” I think we both know the answer to that and to prove I’m right here, dip your toe into the Space Opera pool and buy the song “Over and Over”. It is a classic journey that feels like you truly have taken off into to space. The elements of soundscape that they plug into this song are astounding. This song is that classic 70’s progressive sound that’s less a song and more of a journey. Trust me, if you like progressive rock, you will like this.
Sadly, Space Opera never made it far and has a very limited catalog of music. But, the music that is here is amazing. Sometimes the best things aren’t recognized in their own time. Sometimes brilliance isn’t understood when it’s presented because of what else is surrounding it. Recognize this new compilation now because like wine, Space Opera’s music has only gotten better in comparison to what’s out there now.
5/5 Stars
Key Tracks-Over and Over, Singers and Sailors/Fathers, Journey’s End
Doug Morrissey
December 15, 2010
Tracks:
01.Singers and Sailors/Father
02.Journey's End
03.Fly Away
04.Singers and Sailors
05.Country Max (alt version)
06.Unless I'm Gone
07.Marlow
08.Over and Over (alt version)
09.Psychic Vampire
10.Bells Within Bells
11.Still Life
12.Caledonia
13.Snow Is Falling
14.Play It Rough
15.Squeeze Play
By Keith "MuzikMan" Hannaleck at December 16, 2010