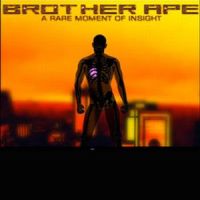 The most amazing thing about Swedish based act Brother Ape is that the remarkable and intricate talents come from a three piece. A Rare Moment of Insight is just that – a very progressive album with strong elements of jazz rock and a chock-full sound indicative of a five or six piece act. This album is great at what it does – provide a very well produced progressive album to a new generation of listeners.

According to the band, A Rare Moment of Insight took less than a year to finish as a result of “not wanting to waste their exceptional momentum with ideas pouring out” Brother Ape had been experiencing. The results are clear and this album is a masterpiece with a plethora of different moods and the listener can “Take a ride/and see what you have been missing.”
The band has a sound indicative of classic prog-rock bands such as Yes and Rush, yet have much more sophisticated instrumentation and usage of effects than their predecessors. Instead, this group is more along the lines of neo jazz-rock acts such as The Mars Volta and Greg Howe. The vocal range of Stefan Damicolas is very immense and high in range. The melodic and slow vocals phrasing over the complex jazz rhythms sound like British prog-rockers Porcupine Tree in eminence and American emo-prog band Circa Survive in style.  A Rare Moment of Insight provides a very subtle use of keyboards and does not implore an overuse of synths. The music occasionally has a very vintage sound, but does not adhere to the traditional timbre. Instead, the music is very fresh and original.
The album begins with the drum crazy, riff heavy “Juggernaut Now.”  This song has an incredible percussion track that remains consistent throughout, a great distorted bass riff, and good use of sporadic transitional elements - very Mars Volta. The listener can hear definite jazz fusion and hard rock influences along with psychedelic. The song transitions very well from a compelling, very heavy and dramatic ending to the eventual bass outro to fade into the next song.
“Seabound” is an acoustic ballad masterpiece, and the highlight of the album. The imagery created with this track is just beautiful. The music, unlike many of the tracks on the album, is not the centerpiece, rather the vocal-centric atmospherics and 60s pop harmonies provide the primary focus.
Overall, this album really progresses throughout and provides the listener with different feelings and mood transitions.  Brother Ape is a great album for any fan of prog music, or a great transition for any fan of modern rock music looking to embrace the intricacies of jazz-rock and classic progressive rock, while embracing something fresh and innovative.
4.5/5 Stars
Key Tracks – Seabound, Juggernaut Now, Chrysalis
Adam Plato
January 14, 2011
By Keith "MuzikMan" Hannaleck at January 14, 2011