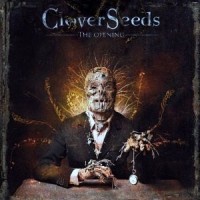 The wall of sound constructed throughout The Opening, the newest release from French Prog-Rockers Clover Seeds, is incredibly fresh and original. Unlike some progressive artists which can be long-winded, over indulgent and difficult for the casual listener to appreciate due to overuse of intricate musical elements, this album is solid and catchy from beginning to end. The instrumentation is tremendous and their influences are vast. The Opening is truly a unique, genre-defying voyage.
‘The first track “Over Camellia” starts in an 11/8 time signature, what you might expect from a prog-rock band. The song does transition back to “normal,” that being a straight triple meter for the chorus. This song is very catchy, very progressive, the drums are incredibly solid, and has a post-grunge feel, especially the raspy, yet well ranged vocals indicative of bands such as Fuel, Alter Bridge or Candlebox. The guitars show tendencies of shredding, yet remain coherent with the rhythm throughout.
The middle of the album seems to transition quite gradually to a more grandiose rock masterpiece with music resembling that of Porcupine Tree. Many of the tracks have a very Chris Cornell-esqe vocal aesthetic, which is not bad at all – it’s difficult to criticize someone for sounding like a man who can peel paint off the walls with his set of pipes. Nice triple meter grooves, and once again the drums are over-the-top great. Probably the surprise track of the album, “Calling Me Down” sounds more indicative of an outtake from Temple of The Dog than a prog-metal song. This song is a great ballad though with intense hooks.
The title track of the album, “The Opening” has a good intro, very psychedelic, has a very driving feel and keeps up the intensity throughout the outro. The drum fills are incredible, the chorus is very catchy and the breakdown utilizes a tasteful use of a whammy effect that would make Tom Morello proud. The closing track, “Enough” is very chill, the intro sounds more reminiscent of post-rockers Explosions in the Sky. The song is palpably built up by the drummer – the most talented member of the band.
Fans of heavy prog-rock/metal may have a hard time getting used to the later parts of the album, but given a chance, the later tracks such as “The Opening,” and “Enough” are true masterpieces. I was certainly not expecting elements of shoegaze and post-rock when I first heard the pure heavy rocking songs at the beginning of The Opening. However, the diversity of this band will help them expand and appeal to a new fan base. Besides, what is the purpose of a progressive album if the music doesn’t progress throughout its duration?
4.5/5 Stars
Key Tracks - Over Camellia, Calling Me Down, The Opening
Adam Plato
January 4, 2011
By Keith "MuzikMan" Hannaleck at January 05, 2011