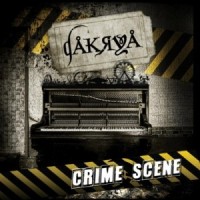 First and foremost, if you are unaware of the avant-garde style of this band and do not know what it is that is about to hit you, it should be noted to not listen to this album right before going to sleep, otherwise, it will haunt your dreams – unless you’re in to that sort of thing. Crime Scene is very focused on the abstract as they push the status quo of contemporary culture, yet the music remains catchy enough to invoke listeners outside of their specific sub-genre, while still remaining safely distant from more mainstream metal music.
The thematic and theatric development of characters such as jugglers, mimes, clowns and gamblers set the stage of a circus gone terribly wrong. The music, however, is not so bad. The eerie resonance of the keyboard/organ sounds are very well intertwined with the heavy guitars and double bass-heavy drum tracks. The music is a breath of fresh air, with the melodic vocal work from female vocalists Christina Kalantzi and Thomais Chatzigianni taking center stage.
At most times on Crime Scene, the music is very melodic. For instance, “The Urban Tribe” has very good use of a bluesy walking bass line and honky-tonk pianos throughout the verses just to rip into full gear in the choruses. “Phantasmagoria” also has an incredibly eerie use of keyboard ambiance and probably the most noticeable use of vocal harmonies and overdubs on the album.
References to Diablo Swing Orchestra are likely to be paralleled, yet the music is often times darker, especially on tracks such as the minor keyed gem “Inertia.” The most psychedelic guitar work on the album is done throughout the intro and verses of this song. The ostentatious presentation of the songs can often overshadow the value and virtuosity each instrument contributes, but the overall presentation and the theatrical experience is the most important factor for Dakrya.
The music can be somewhat repetitive and can take several listens to begin to appreciate. Grandiose theatrics and shock value, while obviously the Dakrya’s intent, also greatly limit the reach of this album. The metal aspects of the music are very strong and progressive however. The sporadic rhythmic transitions, both tempo and time signature, along with the moody keyboards, metal guitars and melodic vocals make this a well-rounded theatrical metal event. Let the show begin!
Key Tracks: Inertia, The Urban Tribe, Phantasmagoria
4/5 Stars
Adam Plato
January 17, 2011