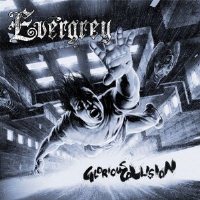 Sometimes you have to start all over again to actually continue going forward. When Tom Englund cleaned house in his band he was left with keyboardist Rikard Zander and the giant question of could they pull off doing a new Evergrey album. Considering that the new album Glorious Collision drops February 22…I’d say they were able to pull it off. Either that or April Fool’s Day comes early this year.
Upon my first listen to the new material I am struck with the hard facts that this is not going to fit into my collection. Not because of style or country of origin but because these songs are HUGE! I’m talking King Kong on human growth hormones huge. Apparently Swedish progressive metal only comes in one size, colossal, because every song on this album is arena sized. The first song “Leave it Behind” comes out of the gate like a Clydesdale competing in a miniature horse racing league. Tom’s voice has wonderful texture to it and his range is awesome. The music is powerful and the addition of a soft piano on the chorus adds another layer to the song. This song is big enough to be another entire album but Evergrey is just getting warmed up.
If loving “Wrong” is wrong, I don’t want to be right. Tom’s voice is perfect as he laments not seeing cracks in a relationship. The guitar solo by Marcus Jidell that comes in at 3:05 is stunning. It isn’t long but the atmosphere that’s created in such a short time is amazing. The addition of the choir is a masterstroke and adds so much volume to the song. “It Comes From Within” starts off with the sound of angels singing but then the angels grow tired of singing and start a demolition company that’s only goal is to destroy your hearing. You could also look at it like someone started a dragster while the choir sings in church. The song has great metal elements that combine with the natural power of Evergrey’s music to create a great performance.
It’s been 16 years since Evergrey formed in Gothenburg, Sweden. In that 16 years they have carved out a nice path of progressive metal sound that defines them. With this release, they open a new chapter in their book that is worthy of you attention.
4.5/5 Stars
Key Tracks-Wrong, It Comes From Within, Free
Doug Morrissey
January 9, 2011
By Keith "MuzikMan" Hannaleck at January 10, 2011