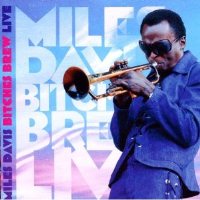 Miles Davis and his electric era is a lot like Starbucks coffee; you either love it or you hate it.  To some people, like me, Starbucks tastes like coffee that has about 14 cigarette butts floating in it and perhaps the thumb of Rasputin just to add that priceless instant gag reflex. Miles’ electric era is much in the same vein, as some people, not me, think it sounds like a perfectly good jazz band that played a special triple secret series of notes known only to a small tribe in the deepest darkest part of the Amazon. As a result of playing this secret series of notes, this once formally straight laced jazz band ended up opening another dimension of time and space where they accidently ate the magic mushrooms and drank the Bitches Brew-aid resulting in a experimentation of sound and color that is as painful as painting your toes orange and letting rabbits nibble on them

This new live release of Bitches Brew is not something you merely listen to.  This is something you experience just like the original albums.  This music is not for the faint of heart and definitely not for those who don’t have an open mind into what music can be.  Miles, when creating this, was pushing the boundaries of art and music. He was letting you into another dimension of music that you didn’t just listen to; you climbed into and let it drive you off into the stars towards the lip of a black hole.
Versions of these songs have been heard live on Live at The Fillmore East. What makes this album special is that the first three tracks were recorded 9 months prior to the release of Bitches Brew and thus gives you a look into the evolution of the Brew. The first three tracks were recorded at the Newport Jazz Festival on July 5, 1969 and have never been released until now. The last six are taken from the Isle of Wright Festival on August 29, 1970.  All of the songs are the amazing wandering adventures you’d expect them to be considering that they came from Miles’ electric period. These recordings are gorgeous and clean as if they were recorded live today.
“Miles Runs Down the Voodoo” is stunning in its infancy. You are getting a glimpse at a songs childhood and you get to see how it develops into the full grown adult you know from the original release.  This, by the way, is the first professional recorded live version of this song and the liner notes also point out that this set also contains the first known recording of the revamped electric version of “Sanctuary”. “Bitches Brew” is jaw dropping.  It sounds evil and haunting and other worldly.  I can imagine the sky over The Isle of Wright clouding over and changing colors as this music plays. It is funky as hell and if the devil has a theme that he bobs his head to as he is driving his 38’ hotrod in search of good people to tempt into bad things, this is it.  “Spanish Key”, with its bass line that just begs you to follow along or more likely keep up, is stunning.
This release isn’t going to make you like Bitches Brew if you already don’t, just like a slap in the face won’t make you like more slaps to the face.  This live album is not something that you just listen to.  This is something you let get into your soul and snake its way around your brain as it takes you to the very edge of jazz music.
5/5 Stars
Key Tracks-Sanctuary (Newport), Miles Runs the Voodoo Down, Bitches Brew
Doug Morrissey
February 3, 2011
By Keith "MuzikMan" Hannaleck at February 04, 2011