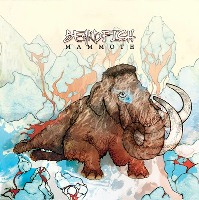 It’s amazing to me that Sweden hasn’t been invaded, taken over, and then had every piece of recording equipment bashed to bits.  Though they have made such amazing contributions to life such as the Swiss made watch, the Swiss bank account, and the Swiss Miss, they have also been giving us what has to be the number one reason for alcoholism, ABBA.  Bearing that in mind, Beardfish has decided to put out a new album, entitled Mammoth, and they, being from Sweden, have an uphill battle to win me over given the past history of what Sweden has done to me hearing.
The Progressive Rock Beardfish can thankfully never be confused with anything that sucks. The sound features elements of Yes, Genesis, and I swear I hear a bit of early Rush in the mix as well.  The opening song, “The Platform”, is good and displays how tight Beardfish is as a unit.  They are made up of Rikard Sjöblom (Keyboard and Vocals), David Zackrisson (Guitar), Robert Hansen (Bass) and Magnus Östgren (Drums). The vocals are in English and thankfully never mention Waterloo.
“And The Stone Said” starts off with what I swear are Whale sounds.  It may just be me and my keen sense of hearing as I was voted “most likely to hear whale sounds in progressive rock” while in high school. There is a sound that comes in around 2 minutes or so that sounds like Frank Zappa and his “Peaches En Ragalia”.  It’s a saxophone like sound that warms the heart with the feeling of good music.  This beast of a song stretches on for just over 15 minutes and goes through more tempos than a drunken marching band though I will say thankfully Beardfish sounds much better than the drunken marching band.  The vocals aren’t bad and I honestly think I will like them more after a few more listens.  Some albums grow on you and this album seems to fall into that category.
“Green Waves” sounds like some members of the band have been traded for members of GWAR until you hear the vocals quiet down.  I honestly think I like the vocals better on this song than the others do to Rikard’s screaming style of singing.  It seems to fit better with the music they are playing.  After all, isn’t a little fury in the vocals  good for everyone? This album is good and will grow on you after a few more listens.
4/5 Stars
Key Tracks-Green Waves, Akakabot, The Platform
Doug Morrissey
February 14, 2011
By Keith "MuzikMan" Hannaleck at February 18, 2011