Review: Nektar-A Tab in the Ocean With Previously Unreleased Tracks 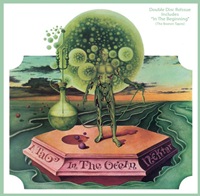 Drugs and Rock music go hand and hand like…well like drugs and Rock music. Nektar, the progressive rock band from the early 70’s, with their album A Tab in The Ocean is a fine example. The story of the album name, as it’s told around progressive rock camp fires in the woods around Boston and Germany, involves the band members of Nektar, starring at an empty fish tank and the sudden thought of what would happen if you put a giant tab of acid into the sea?
The upcoming re-release of Nektar’s album A Tab in The Ocean has got the die-hard fans of progressive rock of the world more excited than a herd of little yappy dogs greeting the mailman. This re-release though comes with a bonus disc of previously unreleased music called In the Beginning-The Boston Tapes 1970. These recordings were done when the band was playing in Hamburg, Germany and a producer named Charlie Dreyer heard them and invited them back to Boston to record in his studio.
The early recordings sound less like progressive rock and more just like the rock of the time. There are
some dreamy Pink Floyd-like feelings to them but you also get more of a bluesy mood than you find on A Tab in The Ocean. “Our Love Will Last Forever” has a Cream-like sound to it. It’s a great song and feels like a time capsule to better times when music was actually creative. The guitar solo in this song has a Clapton feel to it and is very good. “Do You Believe in Magic” is another great song that has some progressive leanings and shows hints of where Nektar would end up in a few years.
A Tab in The Ocean though is what you’re paying for here. With the nearly 17 minute long title track that captures the sound of the ocean so well that when played live some audience members may actually start treading water. The song never lets you forget that the year is 1972 with the organ being played hard and holding the song together. When the vocals come in with their megaphone with way too much treble sound, it is like being hit in the face with a time capsule. The sound is like nothing you’ve heard in 30 years and
what a wonderful thing it is to hear again. “Crying in The Dark” has got the beauty of the Wah-Wah effect
that sucks you in and spits you out wearing your bell-bottoms and a “Keep On Truckin” shirt. The song is a
literal time-warp and damn good.
The sound on these two albums is wonderfully dated. If you want to hear great rock music that captures a
great sound that is always welcome and timeless then pick up A Tab in The Ocean. If you don’t have this album in your catalog, than you are missing out on a beautiful flashback.
4.5/5 Stars
Key Tracks-A Tab in the Ocean, Do You Believe in Magic, Our Love Will Last Forever
Doug Morrissey
February 14, 201
Label: ItsAboutMusic.com
Website
Product Link
Track:
01.A Tab in the Ocean
02.Desolation Valley/ Waves
03.Crying in The Dark
04.King Of Twilight
Disc 2- (In The Beginning-The Boston Tapes 1970) Previously Unreleased
01.New Day Dawning
02.Do You Believe In Magic
03.CandleLight
04.Gooday
05.The Life I’ve Been Leading
06.Where Did You Go
07.Sealed With A Kiss
08.Our Love Will Last Forever
By Keith "MuzikMan" Hannaleck at February 14, 2011

Email ThisBlogThis!Share to TwitterShare to FacebookShare to Pinterest
Labels: A Tab in the Ocean, ItsAboutMusic.com, Nektar, Prog Rock