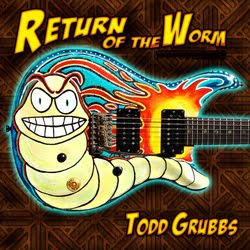 3/14/2011 – Tampa, Florida - Much to the anticipation of guitar aficionados across the globe, Florida guitar virtuoso Todd Grubbs is releasing his new CD 'Return of the Worm' this month (March 2011). Todd Grubb's previous CD 'Space, Time and the Electric' garnered rave reviews throughout the wworld, elevating the guitarist to cult status amongst seasoned musicians. Now Todd is back with an album that is sure to thrill and inspire those who listen. “My new CD is a little different than my previous few releases,” explains Todd, “although it really may be more of a progression in being truer to myself. I really have gotten to the point where I am creating my music without any consideration of what others might think, or what I think others might think. Don't get me wrong, this is still a crazy guitar CD with tons of varied guitars flying around, but I had a lot of fun with the addition of 'field recordings'; a group of interesting recordings that I have made over the years and then I have built compositions around them or interjected them into preexisting songs. That was definitely the best time I have ever had making a CD and I am excited about continuing in this direction.”

Like his last CD, Todd Grubb's newest masterpiece features and array of special guest artists including Mike Keneally (Zappa), Blues Saraceno, John Wesley (Porcupine Tree), Sean Malone, Mark Prator, Jerry Outlaw, Pattrick Bettison, Jeff Henry and Alan Tatum. “I am thrilled to have some great guest artists on this CD,” Grubb's exclaims excitedly. “I was very happy to get Mike Keneally to do a solo, he is a huge inspiration to me on a number of levels, number one his talent is huge, but even more important, his true passion for creating pure music for art's sake has moved me to do the same. Blues Saraceno also contributes an excellent solo, he has always been one of my favorite players because he has such a cool feel. Last but not least, my friend John Wesley from Porcupine Tree was nice enough to add a great solo and help me finish my CD with a dual jam as it fades out.” Todd Grubbs studied at Berklee College of Music and has been voted 'Most Outstanding Guitarist' at the Tampa Bay Music Awards, as well as winning the 'Most Outstanding Video' two consecutive years in a row. Along with Frank Zappa, Grubbs has a large range of influences such as Steve Vai, John Coltrane, The Beatles, Charles Mingus, Kate Bush, Paul Gilbert, Jeff Beck, Michael Schenker, Shaun Lane, Ulli Jon Roth, Adrian Belew and Jonas Hellborg.”

As well as releasing his new CD, Todd Grubbs has been busy with many side projects such as creating the Todd Grubbs School of Rock; a teaching program that teaches kids and adults how to play in a band. Along with a steady roster of students he teaches, Todd has recently been producing other acts, like the debut CD by Young Rockers Beyond Ariose. “I am working on a DVD project,” adds Todd. “It really is a work in progress. I have a lot of old stuff I am compiling, I have shot some live in studio footage and I plan to shoot a live concert as soon as I can get all the logistics together. I also play guitar in an electric blues/jam band called 3 Green Windows, we have just released a CD called 'Deep Green Blues' which I produced.”