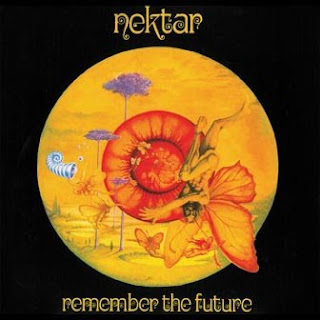 Philadelphia, PA – Considered one of the greatest 'prog' albums ever to be recorded, Nektar's 'Remember The Future' (#5 in Billboard in 1973) has been re-released by Philadelphia's ItsAboutMusic.com. Fans of the progressive rock genre are rejoicing with the new reissue of Nektar's classic album, along with the added bonus CD of an unreleased live concert from 2007 and a full live performance of 'Remember The Future'.

The main driving force behind Nektar Roye Albrighton discusses the concept behind 'Remember The Future': “We imagined the scenario where an alien landed here but was unable to communicate in the normal sense by voice, and was so alien looking (aka blue skin) that he was frustrated until, that is, he met a blind boy. With his mental powers the alien could communicate with him easily enough and proceeded to describe to him that he had visited earth once before. He also described what had happened to the human race all that time ago and tried to impress on the boy that humans should not make the same mistakes again.”

Unquestionably, 'Remember The Future' propelled Nektar to the next level of international success, particularly in the US. “The album took us all by surprise that is was so well received,” says Roye. “We had no idea that it would become such a milestone in the progressive rock arena. Personally I like the album, it's also a pleasure to play live (especially part two). I wouldn't say it is my favorite Nektar album, but it ranks high. My all time favorite 'Recycled', which was a joy to record, is still very listenable and a real blast to play 'live' as it brings out the true power of the band.”

The Nektar story is a remarkable one. A British rock band that found stardom and major success in Germany and the USA, yet failed to make the significant breakthrough in their own country. With three gold albums under their belt ('Remember The Future', 'Down To Earth' and 'Recycled'), Nektar produced some of the most original work of the seventies and eighties. In virtuoso guitarist Roye Albrighton Nektar had a charismatic front man who had shared a stage with Jimi Hendrix, in Allan "Taff" Freeman a unique keyboard player, in Derek "Mo" Moore a bass playing powerhouse and in Ron Howden a fluidity rarely found in a drummer. Fifth member Mick Brockett was not a musician, but was responsible for one of the most stunning light and visual shows ever to grace the rock stage. Nektar's history appeared to have been written when they finally split in the eighties. Despite attempts to re-kindle the flame, the Nektar light, it seemed was out...until that is, the year 2000. The new millenium saw the long awaited reunion tour of the classic line-up, to rave reviews and fantastic receptions. The light we thought was out, had in fact been kept aglow - by loyal fans across the globe! "It's pretty timeless music," says Roye Albrighton, "and what I'm hearing from most of the new, younger fans that are now coming to our shows, is that it's like going back in time. They are starting to really discover music again, which, of course, is a great relief to us and some of the older bands from our time."

An American tour in September 2004 saw Taff Freeman depart the band for personal reasons and his successor, Hammond virtuoso Tom Hughes, instantly earning a place in the hearts of the Nektar faithful. In 2007 Nektar truly took over their own management, procured their official website as their own, entirely under their control and went on a 22-date tour of Germany. Joining Roye and Ron was Peter Pichl on 5-string bass and Klaus Henatsch on keyboards, these two new members from the rock 'n roll city of Hanover, Germany, seemed to gel from the outset and along with the release of the critically acclaimed CD 'Book of Days' in 2008 and the live DBL CD 'Fortyfied', Nektar has set its mark once again. With continued concert dates, along with the remastering of the remainder of the Nektar back catalogue on CD by ItsAboutMusic.com, this legendary band has become once more a proud force to be reckoned with in the world of progressive music. Now fans of the band can enjoy their timeless classic 'Remember The Future' with pristine sound, and for the first time hear an unreleased concert of Nektar in 2007.