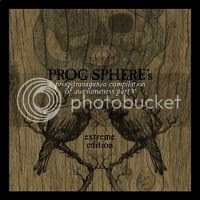 Having published four parts of our series of Prostravaganza compilations and coming up with this 5th part, the “extreme edition”, we may say that we have two great things to celebrate. First of all, we are one year old and we’re crawling pretty well. Secondly, this is the fifth part of our series, so we can say it’s a sort of a jubilee, can’t we?
So, an Extreme Edition huh? What do you think that should sound like? You’ve guessed right! This time we’ve created another theme compilation and our main team is… metal! You will hear some melodic stuff, some straight prog metal, but also some extreme stuff. Thus, this is our heaviest compilation we put out to date. The new counties in our ever growing list are The Netherlands, Venezuela, Australia and Moldova. Not much, but we’re sending our proggy tendrils across the world with each new compilation. USA and UK took a lead this time, having three bands each, while France and Sweden are presented with two tracks each. But in our understanding of the whole thing it’s not important where all these bands come from, what’s important is the actual music and nothing more. And music is good.
Twenty-one bands this time too (if you recall, the previous compilation had the same number of bands), but this time we present you only premiers. And what should I say about the cover? Mr. Sundstom provided another masterpiece from his golden hands, this time bringing forth something truly evil, evoking in that way the essence of metal.
After this compilation we’re going to take a bit of a break with them until July so we can give you all some time to digest them, as well as ourselves some time to plan! Of course we will keep on bringing you more hot interviews and reviews in our normally chaotic way. The next compilation might deal with Italian prog, but since this hasn’t been 100% confirmed, don’t quote me. Even if the next compilation is RPI, we’re certainly going to do themeless ones in the future, so we would love to invite all of you who play or know someone who plays in a band that would be interested in contributing to future compilations, to drop an email at progsphere@gmail com for a possible agreement. Feel free to get in touch with us through the social networks which links are shown below.
And now get in your spacecrafts, start up the engines and head for another journey.
Tracklist:
EXIVIOUS – Waves of Thought (The Netherlands)
MIOSIS – The Lucid (Sweden)
AGNOSIA – Adrift Into Lie (Greece)
FORNOST ARNOR – The Tragedy of Delusion (UK)
AZURE AGONY – Mystic Interiors (Italy)
RELOCATOR – The Alchemist (Germany)
DARKWATER – Breathe (Sweden)
ECHOES – Despair (Venezuela)
BLOTTED SCIENCE – Laser Lobotomy (USA)
HOOKAHTHEFUZZ – (D)Illusion (UK)
HEMINA – And Now to Find a Friend (Australia)
NEUROMIST – Reason Crusade (Moldova)
EXIST – Writhe
(USA) ALLEY – Days for Gray (Russia)
HESUS ATTOR – Senorai (Croatia)
A FOREST OF STARS – Raven’s Eye View (UK)
FINNR’S CANE – The Hope for Spring (Canada)
ERYN NON DAE. – Existence Asleep (France)
CHRONEIROS – Zeuhl (Serbia)
7th NEMESIS – Distorted Mass (of Unformed Matter) (France)
GRAYCEON – Shellmounds (USA)
[DOWNLOAD PROGSPHERE'S PROGSTRAVAGANZA COMPILATION OF AWESOMENESS – PART 5 HERE]
By Keith "MuzikMan" Hannaleck at April 27, 2011