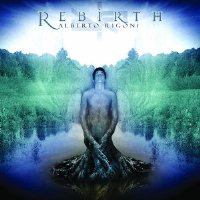 From the bouncy opening track “Free” to the nearly classical/new age sounding ending tune “White Shine”, each song here gives the idea of rebirth and a fresh interpretation. Sometimes it sounds like an angry and violent emergence into new life, and at other times it's more of a peaceful spiritual awakening.  Indeed, the most striking aspect of Rebirth by Alberto Rigoni is the albums near bi-polar character.  The songs regularly alternate between pleasant ambiance and aggressive progressive rock, with a little breathing room left between for free musical expression.
As you would expect on a CD by a bassist, the low end is where the action is.  On the fifth track, “Emptiness”, the ominous bass emerges and recedes at just the right moment in conjunction with cool chorus/electronica effects to nicely frame the vocals. This is one of the tunes where he doesn't mind letting the guitar get crunchy.  It's a heavier sound that he uses on “Emptiness”, as well as on “With All My Forces”, that's a little reminiscent of King Crimson.  On the other, softer hand (the title track “Rebirth” is a great example) Rigoni's bass playing is highly expressive and emotive.  He employs some interesting advanced electric bass techniques throughout the album, including the extensive use of harmonics on “The Net”.  Another neat moment comes with the really unique 'vibrato' he uses on “A New Soul”.  It ranges from true vibrato to something much more like ornamentation that utilizes quarter tones rather than the usual scale.  Fun stuff!
Who knows exactly what Rebirth means to the artist Alberto Rigoni.  He's telling us on this CD, but of course, it's widely open to interpretation.  I can tell you, though, that if you want, this CD can be your personal rebirth to the possibilities of the bass in modern rock.  If you like some hard rock mixed with your smooth bass, kind of like a black and tan from your favorite bar, then you need to check out the mix on Rebirth.
4/5 Stars
Key Tracks- Rebirth, The Net, A New Soul
Donny Harvey
May 28, 2011
By Keith "MuzikMan" Hannaleck at April 29, 2011