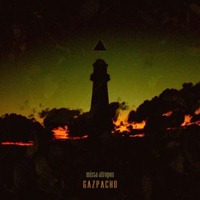 Gazpacho’s latest release, Missa Atropos, is the third in a series of conceptual epics, and in keeping with the trend, it is more like a symphony or a soundtrack than just a collection of tunes they’ve written. It tells the tale of one man who separates himself from society and isolates himself in a lighthouse, “with only the sea and his mind for company,” to write a mass for the goddess Atropos. This album is that mass and like the sea itself, it is deep, dark and fascinating.
It is fitting, that one who would sever all ties with the world would choose to celebrate the one who severs our ties with the world permanently, as Atropos herself does with her “abhorred shears”. The title sets it up perfectly, because in addition to hinting at its subject (a mass for Atropos), it is also a glib reference to the albums underlying themes of misanthropy, separation and isolation.
Missa Atropos is worth it for its emotive vocals, powerful keyboards, air-tight rhythm section and possibly the coolest device of all, “real samples of coded information sent during the cold war on short wave radio.” It is a funeral mass for a funeral maker. Imagine what would happen if Pink Floyd and Radiohead collaborated to complete Mozart’s Requiem Mass in D Minor (K. 626). This album reveals Gazpacho’s proficiency for crafting complex aural arrangements as well as their ability to form and maintain a cohesive narrative.
This is an album that will require a bit of your time. About an hour, front to back (and front to back is always the best way to listen to an album like this), and the songs themselves don’t run short, as they take their time when developing themes and melodies, creating an emotional and dynamic atmosphere. If you’re pressed for time or don’t have the stamina or attention span, the first four tracks can be your barometer. If you don’t dig it by the eleven minute mark, chances are you’re not going to.
4/5 stars
Key Tracks – Mass For Atropos I, II & III, Snail, Missa Atropos, Vera
Drew Vreeland
April 5, 2011
By Keith "MuzikMan" Hannaleck at April 05, 2011