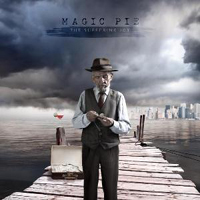 I am continually impressed by Norwegian bands these days. Their English is better, and their lyrics more intelligible than most contemporary American music. Magic Pie is, of course, no exception.

The Suffering Joy offers vocal melodies and supporting harmonies that are consistently crisp and clear (when they find the time to squeeze some vocals into the epic riff fest that most of their songs become) and the subjects aren’t too abstract as to be impossible to relate to. There is a duplicitous edge to most of their songs, their themes often examining the Love/Hate, Life/Death, Good/Evil contrasts.
The guitars are out there, and boy do I mean out there. It’s like Yes and Umphrey’s McGee trying to out jam each other. But where some prog-rock wannabes try to substitute pedantic progressions and cerebral modes of obscure, outdated scales for genuine creativity and inspiration, Magic Pie instead just let’s fly with the feel good riffs and trills that would make a young Eddie Van sulk back to his bedroom to practice his sweeps. The texture of the synths is…I hesitate to say, perfect. They do exactly what they are supposed to: make everything sound fuller, better and just plain more, adding what Frank Zappa would call the “Eyebrows” to the songs.
Any fan of Genesis, Yes or Jethro Tull will be able to slip into Magic Pie’s latest release The Suffering Joy, and feel right at home. Fans of anything else shouldn’t take too long getting comfortable. The opening epic series “A Life’s Work – Pts.1-4” prove that they’ve got the chops, while “Endless Ocean” shows that shredding and epic sweeping thematic arcs aren’t their only trick. The songs have a natural ebb and flow, which lends to the composition as a whole a very organic feeling. As if the songs just grew up this way, so to speak.
The Suffering Joy is another exceptional release from The Land of the Midnight Sun.
4/5 stars
Key Tracks- Headlines, Endless Ocean, Tired
Drew Vreeland
April 6, 2011