Review: Power Of Soul: A Tribute To Jimi Hendrix 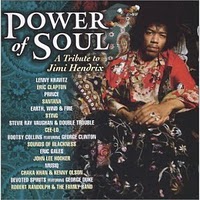 Power Of Soul: A Tribute to Jimi Hendrix is almost as much an event as it is an album, for there are so many big names on it that one doesn’t know where to begin. Artists of almost every conceivable genre, a multi-cultural mix of styles and musical elements all come together to pay tribute to Jimi Hendrix: Santana, John Lee Hooker, Cee-Lo and Stevie Ray Vaughn, just to name a few. And if that’s not enough to turn your gears, even Eric Clapton, the man who arguably established Hendrix, launching him to international stardom, makes an appearance. If only Hendrix himself could have had as long and illustrious career as Clapton, who knows what musical milestones could have been achieved. That man did for rock and roll (via his electric guitar) what Miles Davis did for jazz (via his trumpet), and if he hadn’t died so unfortunately young, chances are he could have done it five or six times more.
After a brief introduction from Jimi’s father, James “Al” Hendrix, we dive right into “Are You Experienced?” which, for my money, is as good an opener as any. It asks the listener a very important question: are you experienced? Clearly the people dedicating their time and creative efforts to honor one of rock’s greatest legends are, and prepare to become experienced yourself, dear listener, if you’re not already.  Musiq (aka Musiq Soulchild, aka Taalib Johnson) does an exceptional job of emulating the soul which characterizes Jimi’s vocals, and the transposition of the guitar solo for what sounds like a kazoo is an entertaining departure from what one might expect to hear. Taking the guitar out of “Guitar God’ just leaves you with “God”, I guess, and it is exactly this type of reverence that an album such as this is meant to convey.
On the whole, this is an album of amazing material performed by exceptionally talented artists. My only complaint, if it’s even reasonable to have such a complaint about an album like this, is that the songs sound a little too much like Hendrix, if that makes sense. One would expect Lenny Kravitz, who has spent almost his entire career emulating the man himself, to contribute a track that sounds just like a Hendrix B-side, played by a different band, but I was hoping for a little more from the likes of Sting, Prince and a few of the others. Not that they were bad recordings or poor song choices, they just didn’t bring enough of their trademark sound, however you’d choose to define that, to their particular tracks. They were fine, just a little too neat is all. Ironically, Kravitz’s track, “Have You Ever Been (To Electric Lady Land)” was one of the fewer departures on Power Of Soul. Kravitz, along with Bootsy Collins (assisted by George Clinton), Cee-Lo Green, Robert Randolph (assisted by his Family Band) and Earth, Wind and Fire, all seemed to take their choices to heart and play them as if they were their own. Most of them, for better or worse, sound more like a collection of covers. Really good covers, though.
Before even pressing play, the track I was most excited about hearing was Cee-Lo Green’s rendition of “Foxey Lady.” After he included his version of Band of Horses’ “No One’s Ever Gonna Love You” on his latest release The Lady Killer, to me he can do no wrong. He has carte blanche to cover anyone, and I can rest easy knowing I’m going to be entertained. To be sure, he did not disappoint. Slightly more up-tempo and with the signature Cee-Lo harmonies that you’d hope to hear: not too much, and in just the right places. John Lee Hooker’s contribution is almost necessary on this album to see how musically, the cycle can be completed. Taking “Red House,” a blues-inspired rock tune, and turning it into a rock-inspired blues number, and makes it sound as if it were his own.

Both Santana and Clapton chose tracks with modest solos, “Spanish Castle Magic” and “Burning Of The Midnight Lamp” respectively being propelled primarily by the vocal melodies, which leaves it up to Stevie Ray Vaughn to burn it down on the last track (an encore, if you will), by leading “Little Wing” into “3rd Stone From The Sun,” ending the album with a twelve-minutes-plus solo meltdown, which serves to remind us that despite his talents as a lyricist, at the end of the day, Jimi Hendrix wasn’t about poetry, he was about squeezing insane sounds out of an electric guitar. That’s his legacy.
5/5 Stars
Key Tracks- Power Of Soul [Bootsy Collins feat. George Clinton & The P-Funk All-Stars], Purple Haze [Robert Randolph & The Family Band], Foxey Lady [Cee-Lo Green]
Drew Vreeland
April 11, 2011
By Keith "MuzikMan" Hannaleck at April 12, 2011

Email ThisBlogThis!Share to TwitterShare to FacebookShare to Pinterest
Labels: Power Of Soul: A Tribute to Jimi Hendrix