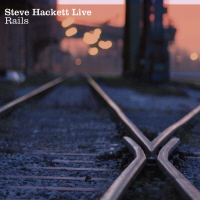 From the eerie “Intro” of Live Rails your ears are quickly being primed for an eclectic experience. This is the latest live album from Steve Hackett. The ambience from the crowd’s cheers delivers enough authenticity to make you believe that you’re there listening to Steve Hackett in concert.
The live album is kicked off with the erratic 1979 song “Everyday” off of Hackett’s Spectral Mornings album in which Hackett rips off on a guitar solo so dumbfounding that it’s hard to believe that the strings were just beginning to warm up. After letting the audience know where he’s been, Hackett shows the audience where he’s at now by proceeding to perform songs off of his 2009 album, Out of the Tunnel’s Mouth.
He begins with the twinkling background of “Fire on the Moon”, mounted by the soft vocals of a torn man’s thoughts that are abruptly broken up by the intermittent drums being thrashed by Gary O’Toole.  This is followed by “Emerald and Ash”, a song that seizes its listeners ears with an enchanting sonic blend and lyrics that push your imagination; “Sugarplum fairies on parade, the smiling dolls wield the sharpest blade. Candy floss pink the sequins whirl, beneath a serpent ready to uncurl. “
Things mellow out on “Ghost in the Glass”, a jazz influenced performance that begins with Rob Townsend & Roger King combining their talents on keyboard and percussion before Hackett’s guitar arises and soothes the audience. The instrumental track is short but sweet, just enough so you may appreciate the musicians’ talents.  But on “Ace of Wands” you’re taken on an incredible journey that switches tempos and styles. It’s a fun display of cohesion between Steve Hackett and the band that was put together for this tour.
As you move deeper into Live Rails you just have to sit back and immerse yourself in the music. Appreciate the talents of Steve Hackett, the compositions he has created and the ability to perform them at a high level.  Once your ears are serenaded by “The Steppes”, the energy filled “Slogans” and the airy “Serpentine Song” it feels as if cloud nine had a concert, and Steve Hackett received top billing.
The nearly eleven minute piece, “Firth of Fifth”, showcases a classic song from Hackett’s former group, Genesis. The following song, “Blood on the Rooftops”, features another Genesis original from the 1976 album, Wind & Wuthering. This was a collaborative creation written between Hackett and former band member, Phil Collins.  Hackett offers more of his recent work on “Sleepers”, which begins with a melodic flute and easy-going vocals until it’s hijacked by heavy drum play and a spirited electric guitar.
Live Rails ends with the experimental “Clocks” in which drummer; Gary O’Toole goes on a ridiculous drum solo, much to the delight of the crowd.  Steve Hackett’s 12th live album is just a testament to his legendary status in music. Having been recently inducted into the Rock & Roll Hall of Fame in 2010 due to his contributions to Genesis, Steve Hackett continues to produce music that’s as electric as the third rail. Just hope that you’re train of thought passes along these rails because it’s a mind-blowing path.
5/5 Stars
Key Tracks – Emerald and Ash, Blood on the Rooftops, Serpentine Song
Enrique Grijalva
April 5, 2011
By Keith "MuzikMan" Hannaleck at April 06, 2011