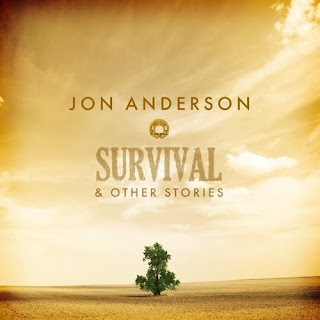 Asheville, NC - One of the most recognizable voices in music, the legendary Jon Anderson, best known for his work with Yes, Vangelis, Kitaro and other notable music artists, as well as his innovative solo efforts, is preparing to release one of the most highly anticipated albums of the year, 'Survival & Other Stories'. Featuring eleven new luminous songs with themes about love, life, understanding, healing and survival, Jon's new CD has an inspirational message for all who will listen!

“About four years ago I just put in an ad on my website: 'Musicians Wanted'... This is the result. Writing the songs for 'Survival & Other Stories' was uplifting for me on many levels, I was working with musicians from around the world Via the Internet, it's a new world, music is a healing energy, I had a tough 2008, through illness, and the Music I've been writing since is a celebration of life on many levels...I hope you get the chance to hear the album..Big Love..Jon." 'Survival & Other Stories' is the first of three albums to be released by Jon Anderson in the next two years.

Jon recently completed a successful east coast tour of the US, “An Acoustic Evening With Jon Anderson”, which featured and exciting mixture of material from Jon Anderson's prolific solo career, collaborations with Vangelis and classic YES songs, along with new compositions from his new CD 'Survival & Other Stories'. Jon will be performing select shows throughout this summer in the US and Canada. For tour dates visit www.jonanderson.com/tour.html