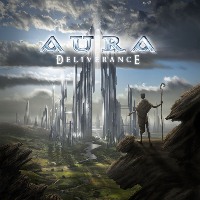 
When I played this album for the first time, I thought I was listening to a movie soundtrack. The first track, “The Arrival,” opens and you hear the digitized sound that precedes a movie in the theater. I was intrigued. Listening further to this dynamic album, I was drawn into the epic story and sound.


The album is very conceptual. It is about a man’s dream as he relives the suffering of the Israeli people while traveling through Palestine. To complete his dream journey, he must also take upon himself the tribulations of Christ to achieve his own redemption.  This is not an album you can listen to just once and immediately have a clear cut impression. Several spins later and I am still thinking about the lyrics as I write this review.
The music spectrum in this album is primarily metal edged progressive rock, but the melodies are cohesive and the sound structured and organized well. Each song is quite complex and takes you on the inner journey of the dreamer’s mind. “Egypt’s Call” is the third track in the album. It begins with a heavy metal edge to it, but as the vocalist begins to sing, you are swept away on a wave of dream imagery that really captures the soul of what this album is all about.


“The Glorious Day” has an interesting opening. Guitar riffs bubble and froth into lyrics that sing about the Son of Man and Resurrection. Rock with striking guitar work really brings the dream journey to life. “The Last Stand” begins with some light strumming and evolves into a gorgeous tapestry of sound with vocals and audible presence leading into the last track, “Resurrection,” which spins into a joy filled victory of redemption and blazing guitar action that will leave you thinking about the album and reaching for the start button to play it again.


Deliverance is an album that has captured my attention. The conceptual nature of a dream journey and redemption through the suffering of the Israeli people and Christ himself intrigues me. It makes this reviewer wonder what inspired Aura to write this album, but at any rate, I will be listening to it again for weeks to come. Each time it spins, I get more out of it. The epic vocals make me think I am in the movie theater watching a really hip rock version of an old Bible movie with science fiction influences. It works. More than that, it is a full on assault of the senses with the metal edged rock, vocals and theatrical flair. It’s worth the time to listen and this reviewer will be watching for Aura’s next release with great anticipation.