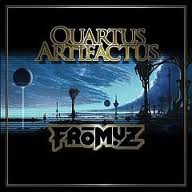 Fans wondering how From.UZ has managed to put out such a powerful and protracted release so hot on the heels of 2010’s Seventh Story might do well to know beforehand that Quartus Artifactus is more like a best of collection, even though the title doesn’t specify as such it is alluded to. The name (“Fourth Artifact(s)”) suggests the unearthing of antiquities. (It is also interesting to note that in Israeli culture, the name Quartus is often given to females, so this album is most likely a girl, for what that’s worth to you…)
You shouldn’t shy away from this album the way you might other best of or greatest hits collections, because it’s not just more of the same. Fans may find in these tracks a new version of an old favorite and anyone who hasn’t had the pleasure of an Uzbek prog-rock introduction might find in this album a delightful mix of the foreign and the familiar. Citing as influence such genre giants as Yes, King Crimson and Jethro Tull, you can tell their collective heart is in the right place even if you can’t hear overt connections to their influences in the songs. Each track is complex, dynamic, well written and well produced. This album is no less epic for lacking a coherent theme. With nine tracks clocking in at just over an hour and a half, Quartus Artifactus requires endurance for the listener as well as the band. The shortest track* on this album is almost eight minutes long, so get ready for a ride. (*I’m not counting “Perfect Place” which, at one minute thirty seven seconds is clearly not almost eight minutes, for the fact that it is an extreme outlier on the time continuum. In addition to being nearly 75% shorter than the next shortest track, it is the only song featuring vocals. It is the only instance in which the human voice is heard, which makes it that much more powerful. Truly in this case, less is more.)
My favorite sound on the album is the creaking door in the beginning of “Harry Heller Theater.” Of all the sounds on this album I love this one the most, but what may be most remarkable is that the band has no consistent drummer (an extra special fact considering how rhythmically complex most of the songs are). The quick transitions and syncopation will keep the listener on their toes, if not ardently tapping them. What distinguishes From.UZ from their progressive predecessors is that they don’t make what a friend of mine calls “Head Music”- meaning you can dance to it. You couldn’t dance to Yes until “Owner of a Lonely Heart” came out, and you’d have to be pretty far out there to dance to King Crimson. So in their own little Uzbek way, they are defying conventions by making music you can move to, which at times can be refreshing and at other, rarer times can be downright necessary.