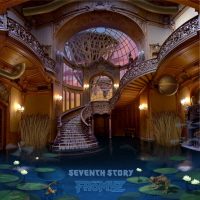 From.UZ is a band from Uzbekistan delivering their 3rd album, Seventh Story. The band was originally formed in 2004 and consists of Vitaly Popeloff (guitars and vocals), Ali Izmailov (drums and percussion), Igor Elizov (keyboards and vocals), Albert Khalmurzaev (keyboards, sound design and vocals) and Sur’at Kasimov (bass).
The first chapter on Seventh Story, "Perfect Place," sets the cinematic tone for the album with an eerie introduction before the acoustic guitar and vocals make an appearance. However, the sole instrumentation on "Parallels" is enough to engage the listener as the guitars perform wizardry on the song. “Parallels,” which is actually 20 minutes in length, is worthy enough to sit through as its constant change in tempo and musical style refuses to bore the listener. "Desert Circle" continues the storyline concept. After some dialogue, we're met by a guitar solo that builds the further you allow yourself to explore. About one-third of the way in the track appears to come to a slow stop until it comes right back with a jazz-influenced section that continues up until revisiting the rock piece it began with. The divine grouping of the bells and piano on "Bell of the Earth" is stirring enough to bring peace of mind to a stressful day. The dialogue returns on "Taken," another near 20 minute experience that captures the group's ability to experiment with sounds and styles without losing musical quality. This is most evident on "Influence of Time," a playful track that incorporates Morse code signals to set in motion an unusual experience. The album ends with "Perfect Love." It’s the perfect ending to a beautifully peculiar album.
From.UZ provided great entertainment with little to no lyrics on a seven track album that runs for over 70 minutes. If you want to find some music to keep you on your toes or something to help you escape reality then Seventh Story is the album for you.
4/5 Stars
Key Tracks – Parallels, Bell of the Earth, Influence of Time
Enrique Grijalva
May 7, 2011
By Keith "MuzikMan" Hannaleck at May 08, 2011